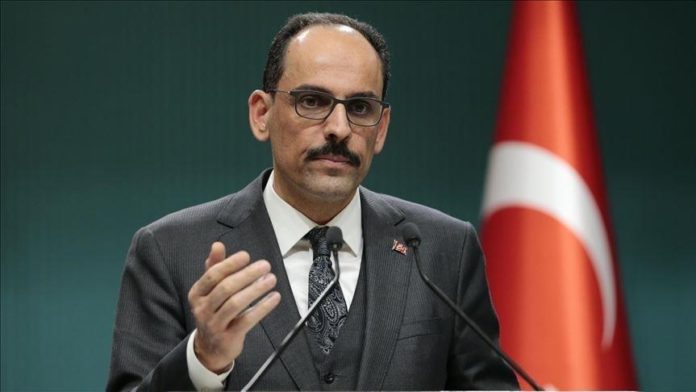 US President Joe Biden’s remarks on the events of 1915, which distorted historical facts under pressure from the radical Armenian lobby, are null and void, Turkey’s presidential spokesman said on Saturday,

“We strongly reject and condemn this statement, which reflects the slanders of those who are malicious and whose only agenda is hostile to our country,” Ibrahim Kalin said in a statement.

Kalin emphasized that the so-called “genocide” allegations lack any basis or scholarly evidence as required by international law.

“When our President Recep Tayyip Erdogan called for the establishment of a joint history commission to investigate the 1915 events, he wanted to save a historical issue from the shadow of politics and malicious circles. The US president ignored these facts and took an unfair attitude,” said Kalin.

Stressing that historical events must be investigated by historians, Kalin said that these facts cannot be determined by the narrow interests of a political context.

‘Adapting mentality of radical Armenian lobbies is a grave mistake’

Stating that Turkey belongs to a civilization that represents the most important example in the history of the culture of coexistence, he added that Turkey never shrinks from confronting historical reality.

“The losses experienced in World War I represent the shared pains of this region. However, it is a historical mistake to act with the mindset of radical Armenian lobbies that produce nothing but terror and hostility,” Kalin said.

Biden’s statement is based on unfounded allegations that threaten to damage normalization efforts between Turkey and Armenia, he warned.

“We invite the US president to correct this unfortunate statement that would open deep wounds in Turkish-US relations and instead show an attitude that is fair and would serve regional peace,” he added.

Turkey will continue to strongly defend the truth against those who misrepresents the historical facts, Kalin said.