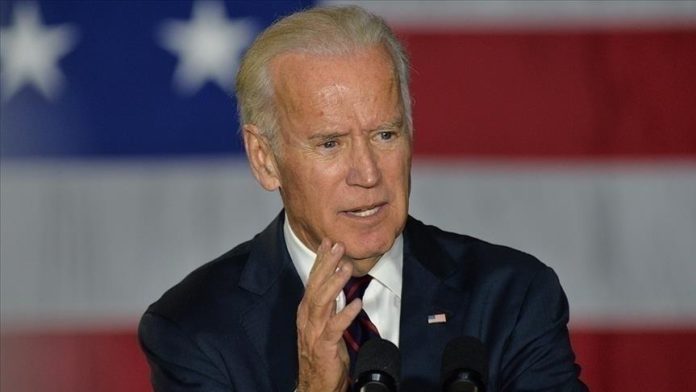 US President Joe Biden entered office with promises to reforge America’s long-standing alliances following tumult under the past administration and redefine ties with prominent adversaries.

One year on, he has been met with uneven results.

Addressing State Department employees just two weeks after assuming office, Biden made clear he wanted the world to know that “America is back; diplomacy is back at the center of our foreign policy.”

“We will repair our alliances and engage with the world once again, not to meet yesterday’s challenges, but today’s and tomorrow’s,” he said. “American leadership must meet this new moment of advancing authoritarianism, including the growing ambitions of China to rival the United States and the determination of Russia to damage and disrupt our democracy.”

The notes of rivalry Biden struck then continue to resonate now, though his promises to double down on traditional alliances and reengage with international organizations have been upturned, at times, by shifting global dynamics.

Biden vowed to restore trust among NATO allies that was significantly shaken by former President Donald Trump’s brash approach to the trans-Atlantic alliance. He needed it to execute the end of America’s longest war.

No matter when the exit from Afghanistan occurred, it was near-certain to be frenzied and chaotic. But no officials in the US or Europe foresaw just how tumultuous it would be.

Expected lifespans of the former internationally-recognized government that saw it standing against the Taliban for months or a year quickly melted away as the Taliban pressed its military offensive nationwide, forcing successive surrenders and retreats from NATO trained and equipped Afghan forces.

In August, it all came to a bloody crescendo. The Taliban took Kabul with US and international forces and diplomats still in the capital. Thousands of Afghans rushed to the international airport to be evacuated by western forces ahead of an Aug. 30 withdrawal deadline.

The US-led international effort saw over 124,000 “at-risk” Afghans flown out of the country in what has become one of the largest mass evacuations in history.

But over 150 Afghans and 13 US service members lost their lives in a suicide bombing on Aug. 26 claimed by Daesh/ISIS’ Afghanistan affiliate, a terror group that has only grown in size and strength following the withdrawal of international forces.

Still, no US troops remain in Afghanistan 20 years after the 2001 invasion, meeting a key foreign policy objective for the president who sought to end America’s longest war.

Vows to reforge alliances with Europe dogged by Pacific aspirations

When the US announced alongside Australia and the UK the formation of a new trilateral military alliance known as AUKUS, they did not anticipate the fierce backlash it would illicit in Europe.

The pact is ostensibly geared at checking the regional aspirations of China, but the agreement was accompanied by a deal for the US and UK to supply Australia with the know-how to build its own nuclear-powered submarine fleet.

That led to the cancellation of a major French-Australian arms deal worth about $90 billion to supply Canberra with conventionally-powered submarines, roiling Paris, which lashed out harshly against the development,

French President Emmanuel Macron recalled his country’s ambassadors to the US and Australia and called publicly for Europe to reduce its military reliance on the US in what marked the worst diplomatic crisis among allies during Biden’s presidency.

Ties have since been mended, but the lasting impacts of the row have to be fully determined.

The AUKUS agreement was just one aspect of the US’ pivot to Asia.

It has been accompanied by Biden seeking to strengthen ties with key Asian allies Japan and South Korea. It is no surprise then that the first White House invitation extended to a foreign leader was granted to former Japanese Prime Minister Yoshihide Suga, followed quickly by South Korean President Moon Jae-in, who visited one month later.

And after Biden convened a virtual meeting of Pacific powers Australia, India and Japan, he gathered them in-person in Washington in September for the first-ever in-person leader-level summit of what is known as the Quad.

At the heart of this flurry of diplomatic activity is China, which is increasingly assertive in the region, and to a lesser extent North Korea, which has been conducting ballistic missile tests in the region in defiance of UN resolutions and sanctions.

Pyongyang’s saber rattling, which has included testing apparent hypersonic missiles, has so far failed to lead to any international sanctions being lifted, which it wants before talks over its denuclearization restart.

Despite vowing to redefine the relationship with China from one of confrontation to one of competition, Biden has minced no words about how he views China and its President Xi Jinping, repeatedly maintaining his counterpart is determined to remake the world order and show the supremacy of authoritarianism over democracy.

“This is a battle between the utility of democracies in the 21st century and autocracies,” Biden said in his first news conference in March. “We’ve got to prove democracy works.”

The month Biden made his remarks was also marked by a now infamous US-China summit in Alaska that devolved into highly rare public barb throwing between the US and Chinese top diplomats.

A virtual summit held in November between Biden and Xi was markedly more civil but failed to result in any major breakthroughs in US-Sino relations as the nations have continued to launch mutual recriminations amid Washington’s concerns over an ongoing rights crackdown in Hong Kong and warnings of a potential invasion of Taiwan.

Biden seeks stability with Russia, but little has been found

The US president finished his first foreign trip in June with a long-awaited face-to-face meeting with Russian President Vladimir Putin in what was billed as an effort to build a “predictable, stable” relationship with the Kremlin.

The tense summit, however, did little to tamp down strained bilateral ties as they sought to reach consensus on a host of issues, from arms control to US allegations of Russian cyberattacks. But it did result in the US and Russia returning ambassadors to each other’s countries in what marked a modest achievement.

A two-hour virtual meeting between Biden and Putin in December came as Moscow began to amass forces along its border with Ukraine for the second time in 2021. That buildup has only continued, now totaling over 100,000 troops alongside a significant deployment of artillery and armored vehicles.

Tensions remain at a fever-pitch in January following a cyberattack on the Ukrainian government that Europe has blamed on Russia. The US and its European allies have warned of “devastating” economic sanctions on Moscow should it reinvade Ukraine after annexing its Crimean peninsula in 2014.