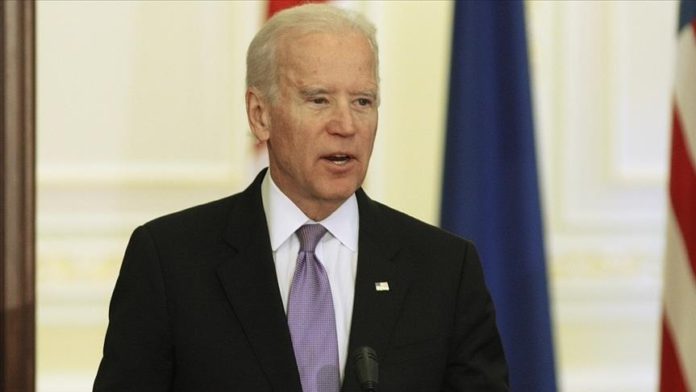 US President Joe Biden’s top energy policy is focused on reducing carbon dioxide emissions and achieving a target of net-zero emissions by the end of the next three decades, experts told Anadolu Agency on Tuesday.

“The overarching priority for the administration is the reduction of carbon dioxide emissions across all aspects of federal policy,” said Ed Hirs, an energy economist at the University of Houston.

“The administration is considering whether it can implement a carbon tax or if it will implement a cap-and-trade carbon scheme across the US,” he said.

With a strong focus on climate change, Biden wants to have a clean energy revolution that achieves a carbon pollution-free power sector by 2035, the White House said in January.

“We believe that one of the key focus areas will be the transformation of the US power sector. Biden would like to completely decarbonize it by 2035,” said Artem Abramov, head of Shale Research at Norway-based independent energy research and consulting firm Rystad Energy.

“One of the biggest ambitions is to ensure that the country is set on a sustainable trajectory towards net-zero emissions by 2050,” he added.

The ambitious goals, however, would come with a hefty price tag.

“Biden broadly outlined that $2 trillion is needed to support his climate-focused plan. I think this is the magnitude of the investments we might see during his presidential term, or two,” Abramov said.

It was reported last week Biden’s advisers at the White House have been working on a $3 trillion jobs and infrastructure package, which includes clean energy.

How shale industry would react?

Unlike his predecessor Donald Trump, who leaned heavily on unleashing the US’ shale oil and natural gas potential, Biden’s energy policies have turned from fossil fuels toward renewables.

One of the first major moves of the new president during his first days in the Oval Office was to rejoin the Paris Climate Change Agreement, which Trump initiated the US’ exit from the historic deal in 2017.

Biden repeatedly said during his presidential campaign that he would not ban fracking — the hydraulic fracturing technology and horizontal drilling method behind the shale oil and gas revolution.

After taking the White House, “the first policy initiative has been to restrict access to federal lands for oil and gas development,” said Hirs.

While Biden’s executive orders apply to less than one-quarter of total US oil and gas output, the major question has been how private industry in the world’s largest oil and gas producing country would react to his policies.

“There is no immediate implications on the US nationwide output from any of Biden’s proposals, but the attractiveness of oil activity will likely be reduced for smaller private operators as the regulatory environment gets stricter,” said Abramov.

“Supermajors and large independents have already jumped on the train of energy transition amid investor demand, they would support the gradual transition towards cleaner energy and stricter regulation of oil & gas [in the areas where it is needed],” he said.

“There will be some legal actions from the industry if the president’s administration attempts to go the radical way (already seeing some of that on the basis of federal permit and lease moratorium),” he added.

Twelve US states filed a lawsuit on March 8 against Biden’s climate change executive order, claiming it would damage the American economy and states’ energy industries.

State attorneys general from Missouri, Arkansas, Arizona, Indiana, Kansas, Montana, Nebraska, Ohio, Oklahoma, South Carolina, Tennessee and Utah argued that the president and his administration do not have the authority to assert and expand federal regulatory power to US states and that Biden’s regulations would have a significant economic effect.

“Gulf of Mexico operators might feel increasing regulatory pressure, but the region will become an important source of energy in the US in the next 15-20 years,” said Abramov.

Biden’s order, Protecting Public Health and the Environment and Restoring Science to Tackle the Climate Crisis, revoked the permit for the Keystone oil pipeline extension, temporarily prohibited drilling in the Arctic and ordered federal agencies to comply with the administration’s environmental policies.

Abramov noted that the American oil industry is on the same page with the Biden administration in Arctic National Wildlife Refuge.

However, Biden scrapping the controversial Keystone XL oil extension pipeline to carry crude oil from Canada to the Gulf of Mexico is likely to have further implications.

Hirs believes Canadian crude will find its way to the US, nevertheless, via railroads while Abramov noted that Canadian oil producers will be left with two major pipeline newbuilds that could increase incremental out-of-basin egress by nearly 1 million barrels per day (bpd).

“With a scheduled in-service date in the fourth quarter of 2021, Enbridge’s Line 3 Replacement (L3RP) will provide approximately 370,000 bpd in incremental export capacity between the Canadian border and Superior, Wisconsin. L3RP’s Canadian segment was put into service in late 2018 and is one of the key transmission components of the larger Mainline system,” said Abramov.

“Meanwhile, the Trans Mountain Expansion (TMX) project entails incremental egress of 590,000 bpd from Edmonton, Alberta, to Burnaby, British Columbia, with further tidewater access to international markets. Owned by the Canadian Federal Government through a Crown corporation, construction on TMX began in late-2019 and the expansion is expected to come on-line in late 2022 at the earliest,” he added.

Apart from the supply, the demand is also an issue as American consumers and refineries will continue to buy crude for transportation or oil-related products whether from domestic resources, Canada or the Middle East, according to Biden.

“Biden administration appears to be short-sighted with some of its policies because these will not change consumer behavior,” he said. “Carbon emissions are driven by the US consumer.”

The coronavirus pandemic, lockdowns and quarantine measures have put downward pressure on global oil consumption. The US consumed 18.12 million bpd of petroleum in 2020 — its lowest since 1995 but still the world’s largest, according to the Energy Information Administration.

Demand is set to rise as COVID-19 measures are eased, while the supply side has turned upwards.

“Both oil and gas production in the US are recovering now after the COVID-downturn,” said Abramov.