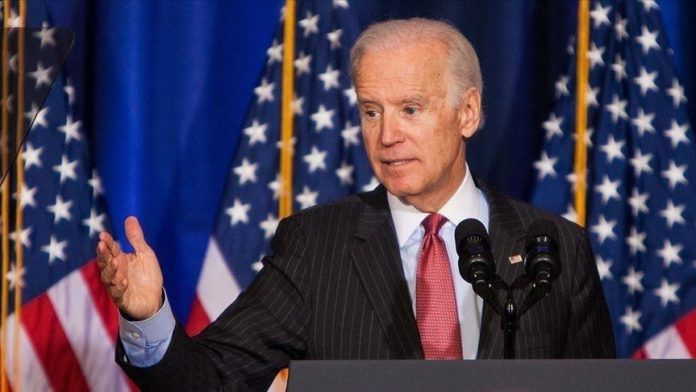 US President Joe Biden urged the country to let cooler heads prevail on Monday after protests erupted overnight in the wake of another fatal police shooting of a Black man near Minneapolis, Minnesota.

Biden urged all parties to listen to the mother of the Daunte Wright, the man who was fatally shot, who, Biden said, appealed for “peace and calm.”

“Peaceful protest is understandable. And the fact is that we do know that the anger, pain and trauma that exists in Black community in that environment is real, serious, and consequential. But that does not justify violence,” the US president told reporters at the White House.

Police in the Minneapolis-St. Paul suburb of Brooklyn Center released earlier Monday body camera footage of the incident showing police attempting to arrest Wright, 20, during a traffic stop on Sunday.

Three officers are seen in the video appearing to attempt to take Wright into custody as he stands at his ajar driver’s side door with one officer attempting to put him in handcuffs. One of the officers says Wright is being taken into custody on an outstanding warrant.

One gunshot can then be heard before the car speeds away with a female officer saying, “Holy ****. I just shot him.”

Brooklyn Center Police Chief Tim Gannon said the shooting was an “accidental discharge,” and said the officer who shot Wright intended to instead tase Wright rather than shoot him.

“It is my belief that the officer had the intention to employ their taser, but instead shot Mr. Wright with a single bullet,” he said during a press conference.

Biden called the body camera footage “fairly graphic,” but maintained time is needed to allow the investigation into the shooting to conclude.

“The question is whether it was an accident or intentional? That remains to be determined,” said the president.

Wright’s shooting led to violent protests in the Minneapolis-St. Paul area Sunday night. The region was already on edge amid the trial of former Police officer Derek Chauvin in relation to the May 2020 fatal arrest of George Floyd.