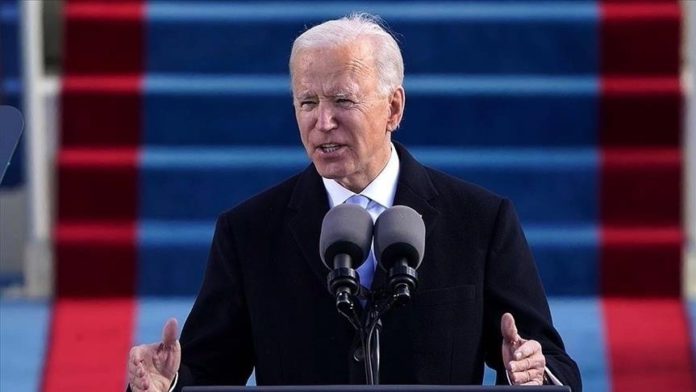 US President Joe Biden on Friday said the “senseless violence” in Afghanistan must stop as Taliban fighters continue their offensive on government-held territories.

Biden reiterated that US support for the Afghan government and its forces will not diminish as he hosted Afghan President Ashraf Ghani and Chairman of the High Council for National Reconciliation Abdullah Abdullah at the White House.

“Our troops may be leaving, but our support for Afghanistan is not ending in terms of support and helping maintain their military, as well as economic and political support,” Biden said in the Oval Office. “We’re going to stick with you, and we’re going to do our best to see to it that you have the best tools you need.”

The meeting comes as Biden’s Sept. 11 deadline for the full withdrawal of US forces rapidly advances with the Taliban launching a bitter campaign against Afghan forces.

Ghani expressed gratitude for Washington’s continued support, adding that he respects Biden’s decision to proceed with the US exit.

“We are determined to have unity, coherence, national sense of sacrifice, and will not spare anything,” he said, further noting government forces have re-taken six districts from the Taliban today, saying the military advances demonstrate Afghanistan’s “determination.”

Afghan government forces are currently locked in heavy fighting with the Taliban in the key northern city of Kunduz after the group seized the main border crossing with Tajikistan. Intense fighting has also taken place on the outskirts of Mazar-i-Sharif, Afghanistan’s fourth-largest city.

Amid the developments the intelligence community downgraded an earlier assessment that the Afghan government would survive for two years after the US exit with a timeline now of between six months and a year, officials told the Wall Street Journal newspaper.