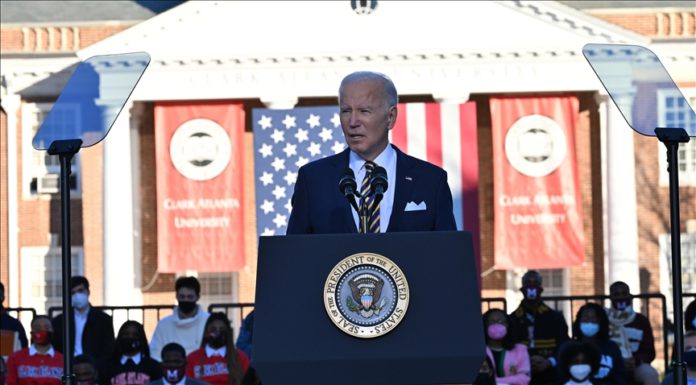 President Joe Biden urged Americans to work to safeguard voting rights in the country as he commemorated the life and work of Martin Luther King, Jr. on the federal holiday on which he is honored.

“On this federal holiday that honors him, it’s not just enough to praise him. We must commit to his unfinished work to deliver jobs and justice, to protect the sacred right to vote, the right from which all other rights flow” the president said in pre-recorded remarks posted to his Twitter account.

“The attack on our democracy is real, from the Jan. 6 insurrection to the onslaught of Republicans’ anti-voting laws in a number of states. It’s no longer just about who gets to vote, but who gets to count the vote, and whether your vote counts at all. it’s about two insidious things: voter suppression and election subversion,” he said.

There are two major pieces of voting rights legislation that have currently stalled in Congress amid widespread Republican opposition, and rejection on needed rules changes from two key Democratic Senators. Biden and his White House have so far failed to sway Sens. Joe Manchin and Kyrsten Sinema to support alterations to what is known as the filibuster.

Under current rules, most legislations must have the support of at least 60 senators in support to break a filibuster, but most Democrats are pushing for changes to the hurdle, particularly on voting rights bills.

The Senate is currently split evenly 50-50, meaning Democrats need to present a unified front to ensure Vice President Kamala Harris can cast a tie-breaking vote in the chamber that would guarantee the rules changes’ success.

A vote on the voting rights bill is not expected until Wednesday, according to multiple reports.

Marches are planned in several cities to honor King on Monday, and demand voting rights progress, including in the capital where his son, Marting Luther King III is being joined by House Speaker Nancy Pelosi and Congressional Black Caucus Chairwoman Joyce Beatty.

Speaking two days after what would have been his father’s 93rd birthday, King III appealed to Biden and the Senate to pass the joint “Freedom to Vote: John R. Lewis Act,” which combines the two pieces of legislation, warning “our democracy stands on the brink of serious trouble without these bills.”

“These laws are being passed with knife-like precision to cut Black and brown voters out of the process, and they’re exactly what the Voting Rights Act once protected,” he added.