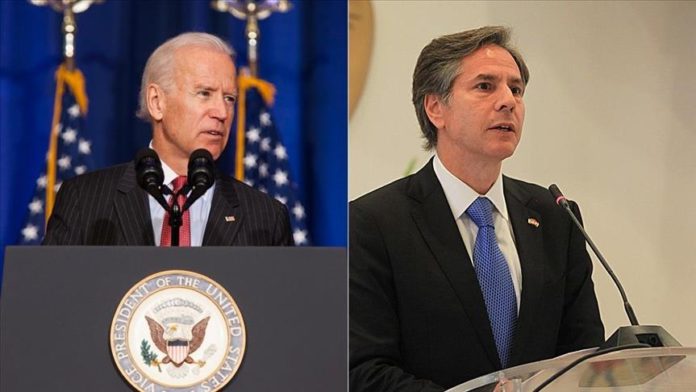 US President Joe Biden voiced strong confidence in his top diplomat Friday after Secretary of State Antony Blinken engaged in a fiery exchange with his Chinese counterpart.

“I’m very proud of the secretary of state,” Biden told reporters at the White House when asked about the contentious start to the first face-to-face talks with China since he assumed office in January.

Normally ahead of such a diplomatic meeting the sides would exchange brief, largely perfunctory statements in front of reporters before engaging in more substantive conversations behind closed doors.

But instead Thursday saw an exceedingly public war of words that exposed the searing fissures dividing China and the US.

It started with Blinken laying into China for its growing assertiveness in the region and what the US says is its increasingly authoritarian approach at home, including its crackdown on the Muslim Uyghur minority the US says amounts to genocide.

Blinken vowed to present a united front against the actions alongside key US allies after concluding meetings with top South Korean and Japanese officials.

The top diplomat’s comments elicited a blistering critique from Yang, who laid out his own grievances against the US, including its difficulties in overcoming its human rights record at home and what he called Blinken’s “condescension.”

A second round of talks is slated for Friday morning Alaska time, and Blinken and Sullivan are expected to deliver remarks to reporters afterwards. It is unclear if the Chinese side will do the same.

US intercepts 3 groups of Russian planes off Alaska