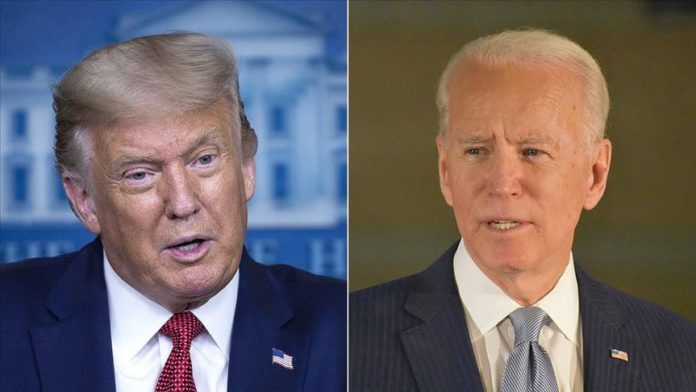 US President Donald Trump said Monday if Democratic rival Joe Biden becomes the next president, his policies would hurt the American economy and hand it to China.

“If Joe Biden becomes president, China will own the United States, and every other country will be smiling also,” Trump told a White House news conference marking the US Labor Day holiday, less than two months from Nov. 3, the US Election Day.

Trump claimed that Biden, who served as vice president from 2009 to 2017 under President Barack Obama, wants to surrender the US to China and to the coronavirus, which the president calls “the Chinese virus,” referring to discredited conspiracy theories.

Trump’s response to the virus has been criticized by the Democrats as disorganized and anemic, resulting in nearly 190,000 deaths, the world’s largest death toll.

“I have taken in billion and billions of dollars from China and given much of it to farmers, manufacturers and the US Treasury,” said Trump, referring to a trade war with China resulting in tariffs on goods paid for by US consumers.

“They targeted our farmers and I targeted them. I gave $28 billion to our farmers. There has been no country anywhere at any time that ripped us off like China has.”

He added: “We’ll prohibit federal contracts from companies that outsource to China, and we’ll hold China accountable for allowing the virus to spread around the world,” he added.

He also targeted the Democratic Party, claiming its members’ economic policies weakened the US labor force over the last decade.

“You spent 47 years sending American jobs to China, Mexico and other countries while collecting millions of dollars in campaigns and super PAC contributions from global corporations and got rich by making American workers poor,” the president said.

Saying US economic growth was strong before COVID-19, Trump predicted that next year the US would return to its “unprecedented prosperity with pro-American policies” via new tax cuts, regulatory reductions, and new trade deals.

Since the global spread of the virus, the US economy lost around 22 million jobs between February and April, but recovered half of this since May. The world’s largest economy currently remains 11.7 million jobs below its pre-pandemic level in February.

Trump argued that the US economy saw the smallest economic contraction among Western nations, and added: “We are rebounding much more quickly from the pandemic.”

The US economy added just 1.4 million jobs in August, according to the Labor Department on Friday, down from 1.7 million added in July.

The unemployment rate in August, on the other hand, came in at 8.4%, improving from 10.2% in July, marking the first time since March it has been below 10%.

“We are currently witnessing the fastest labor market recovery from any economic crisis in world history,” Trump told, adding that unspecified projections indicate there would be a “V-shaped” economic recovery.

– Trump and US military

Hitting back from a crisis in which multiple administration sources reportedly said Trump referred to fallen soldiers as “losers” and allegedly disparaged military service, Trump said: “I’m not saying the military’s in love with me, but the soldiers are.”

He added: “The top people in the Pentagon probably aren’t, because they want to do nothing but fight wars so that all of those wonderful companies that make the bombs and make the planes and make everything else stay happy, but we’re getting out of the endless wars, you know how we’re doing.”

Last week, citing anonymous source, the Atlantic magazine said that during a 2018 visit to France, Trump called off a visit to a cemetery near Paris where America’s World War I dead are buried, because he did not respect those buried at the site.

“Why should I go to that cemetery? It’s filled with losers,” Trump told senior staffers at the time, according to the magazine. He also said the over 1,800 marines who lost their lives at Belleau Wood, a pivotal battle in World War I, were “suckers” for getting killed.

Trump denied making the remarks, but The Atlantic’s reporting has been confirmed by several media outlets, and it is consistent with a pattern of Trump insulting members of the military, including the late Senator John McCain, a former prisoner of war he also branded a “loser” in 2016.