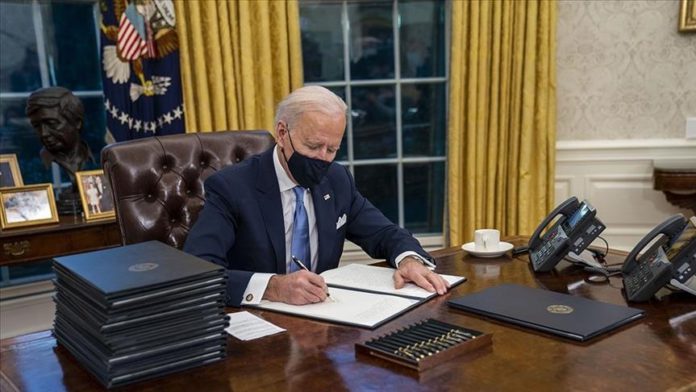 US President Joe Biden presented his $2 trillion plan to revitalize America’s badly aged infrastructure to the public on Wednesday, seeking a tax hike on corporations to cover its costs.

He pointed specifically to economic disparities that were exacerbated by the coronavirus pandemic as the wealthiest in the US largely saw their fortunes rise while millions of people lost their jobs across the country as businesses shuttered or severely curtailed operations.

The trend, he said, “just goes to show you how distorted and unfair our economy has become.”

“This time, when we rebuild the middle class, we’re going to bring everybody along,” he said. “It’s not a plan that tinkers around the edges. It’s a once-in-a-generation investment in America unlike anything we’ve seen or done since we built the interstate highway system and the space race decades ago.”

The sprawling proposal seeks to modernize the US’s transportation infrastructure, including repairs to 20,000 miles of roads and about 10,000 bridges. It would further replace 10 of the US’s “most economically significant bridges” whose needs extend beyond what could be covered with repairs.

As the US sees an uptick in electric vehicle sales and manufacturers shift to meet growing demand, Biden’s plan would establish a network of 500,000 charging stations nationwide.

It would also replace all lead pipes and service lines in the US in an effort to provide clean water to Americans nationwide and increase high-speed internet across the nation, particularly in rural communities where some 35% currently lack the service.

As currently envisioned, the plan would fund the massive nationwide upgrades by nixing Trump-era tax overhauls that saw the federal corporate income tax reduced from 28% to 21% and would further reform how multinational corporations are taxed by instituting a global minimum tax of 21%.

Currently, they pay an average tax rate of just 8%, a senior administration official told reporters on Tuesday. The tax overhaul would further update the corporate tax code to prevent companies from dodging taxes by merging with a foreign company.

In total, the changes would take 15 years to off-set the costs of the plan.

Biden said he is open to alternative proposals to fund the package.

“These are my ideas on how to pay for this plan. If others have ideas, let them come forward. I’m open to other ideas so long as they do not impose any tax increase on people making less than $400,000,” he said.