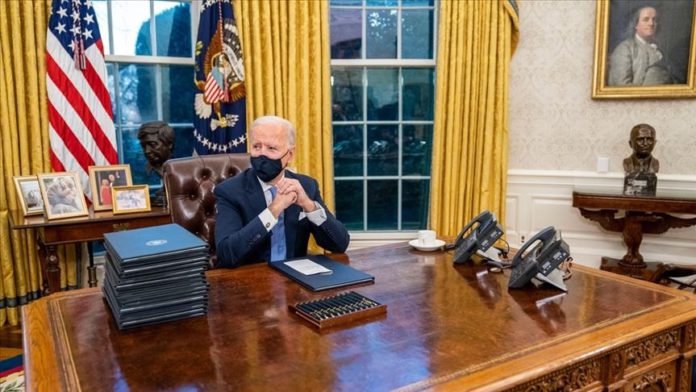 The popular saying, ”From a falling tree everybody gets firewood. That’s the story of us,” often refers to a figure who has authority, and those around him take advantage of the situation.

Since his inauguration last month, Joe Biden has enacted a series of executive orders to put a definitive end to four years of Donald Trump’s policies.

Migration is becoming a trademark project of the Biden administration, marking a contrast from Trump’s punitive approach.

Biden has promised to protect migrants already living in the US — creating a pathway toward naturalization for millions, promoting programs such as the Deferred Action for Childhood Arrivals (DACA) that protects the rights of migrants who arrived in the US as children and an ambitious $4 billion investment plan for Central American countries.

The seemingly humane stance will not go unnoticed and will certainly affect America’s southern neighbor.

According to figures by the National Migration Institute of Mexico, 179,335 people crossed the Mexican southern border as irregular migrants in 2019. Most come from Central America’s North Triangle region — Guatemala, El Salvador and Honduras.

The North Triangle is subjected to extreme violence, similar to a country at war with murder, kidnapping and sexual violence occurring with impunity. Leaving those countries and preventing further transgression has become the only answer for many.

“As long as their communities keep lacking decent life conditions, people will have to migrate, that is why Joe Biden’s 4 billion USD investment announcement is so relevant,” said Eduardo Gonzalez, historian and teacher of international relations at Tecnologico de Monterrey University in Guadalajara.

Gonzalez said Biden is committed to differing from his predecessor’s policies by tackling migration at its roots by focusing on the socio-economic problems that cause people to migrate rather than criminalizing migration.

Abelardo Palardo Gomez from El Salvador has been crossing the American continent for two months. He is now headed to Houston, Texas where he hopes to find work.

“My family doesn’t have water nor light. I had to travel by myself without any guide putting myself at risk. I just ask the American people to help me get a job to provide for my family,” he said.

Biden has differentiated himself from Trump, according to the 29-year-old.

“With everything he says and is promising, I just hope he actually keeps his word that is what we want. I do believe Biden is more understanding of our problems, Trump was just not right in the head,” he said.

Mexico is a transitory country for migrants moving from Central and South America to the US. Its geographical location has made Mexico a target for political pressure from Washington that has ultimately shaped how Mexican authorities deal with the migrant phenomenon.

In 2019, then-President Donald Trump threatened to impose a 5% tariff on imported goods from Mexico, promising a gradual increase until the flow of undocumented immigrants stopped.

As a result, Mexico started detaining migrants and holding them on Mexican territory until a migration status resolution or deportation. But the policy endangers migrants, with organized crime a constant threat.

“When I arrived in Chiapas, a couple of men robbed me. They took around 2000 pesos ($100) I had with me and my cellphone. After they found out I had a friend waiting for me in the US, they tried to kidnap me,” according to Rolan Alexis Andrade from Honduras.

Gangs often kidnap migrants and ask for ransom from family or friends. Nevertheless, criminal gangs are not the only danger migrants have to wary about. Abuse from the National Guard and the military is not uncommon, with reports of beatings, torture and intimidation well documented.

“The Mexican government is the reason behind the massive caravans. [President Andres Manuel Lopez] Obrador said we were protected, that we were welcomed in the country and that we would be safe from crossing it — all lies. When we arrive, the National Guard is waiting for us,” said Padilla. “They beat us, they treat us like criminals.”

While visiting Texas recently to oversee the construction of a wall that separates the US from Mexico, Trump took the opportunity to thank the Mexican president for providing more than 27,000 National Guard members to patrol the border.

“Let’s not think that with Biden the borders will be wide open for Mexicans and Central Americans. It’s not the perfect scenario but is better than Trump’s. We have to wait and see how far Biden can get,” said Gonzalez.

Vicente Zedillo was working as a welder in the US state of California when Immigration and Customs Enforcement agents raided the factory where he was working. He was deported and left stranded in Mexico where he has been living for the past five years.

“I only want to get to the US to resume the life I used to have. My country is suffering. I cannot return,” he said.

When Zedillo was deported, Trump was just settling into the White House. Zedillo remembers his deportation just as the US was going through a turning point. ​​​​​​​

“I hope Joe Biden changes things in the US. The last government was terrible, there was a lot of racism and I truly hope that things are not the same. I wish Americans support us Latinos now,” he said.

Extorted or threatened by local gangs, interviewees refused to have their pictures taken for safety issues.