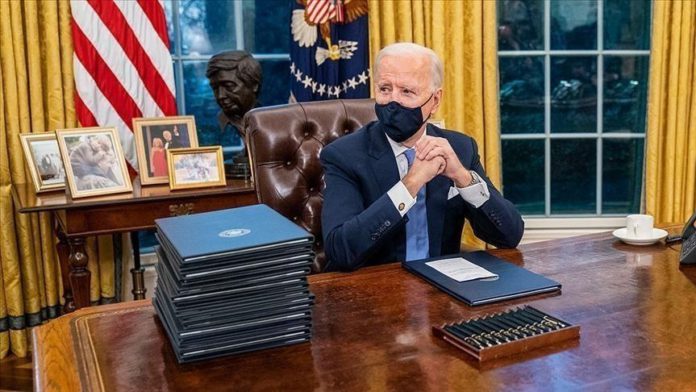 After US President Joe Biden took over the oval office last month, expectations on the country’s foreign policy have risen after characteristically controversial steps by his predecessor rattled various regions, especially the Middle East.

It is “too early to tell whether the Biden presidency will do more than roll back some of [Donald] Trump’s extremist moves,” Richard Falk, an emeritus professor at Princeton University said, expecting the Biden administration “to avoid controversial foreign policy.”

“My best guess would be continuity with the approach to Israel/Palestine taken during the Obama period, with the special relationship maintained, and Israel protected against censure and non-violent pressures of the sort associated with the Boycott, Divestment and Sanctions (BDS) movement or at the UN,” the political scientist told Anadolu Agency.

Formed in 2005, the BDS movement is a Palestinian-led movement that works to end international support for Israel’s oppression of Palestinians and pressure Tel Aviv into complying with international law, according to its website.

Falk said the major signs indicating the direction of the Biden administration’s foreign policy would be revealed by its approach to Iran, “particularly whether it attaches new conditions to the revival of Nuclear Program Agreement (JCPOA) of 2015 from which Trump withdrew.”

Referring to Biden formally ending American support for the Saudi-led campaign in Yemen on Thursday, Falk said “the suspensions of arms deal with Saudi Arabia and the UAE are welcome signs that Biden’s foreign policy might be directed at achieving some demilitarization of the Middle East with special emphasis placed on ending chaos and strife in Yemen, Syria, and Libya, as well as promoting stability in Iraq and Lebanon.”

Saudi Arabia’s campaign against the Houthis has prompted widespread humanitarian outcry amid repeated atrocities, including the 2016 targeting of a funeral in Sana’a, the rebel-controlled capital, that killed more than 100 victims.

Political infighting has taken place amid what is widely considered to be the world’s worst humanitarian catastrophe with Yemen, the Arab world’s poorest nation even before the conflict, facing widespread famine.

The Saudi coalition’s actions aimed at rolling back Houthi gains have been widely criticized by rights groups for worsening the situation and the world’s worst man-made humanitarian crisis with nearly 80%, or about 30 million, Yemenis needing humanitarian assistance. About 13 million are in danger of starvation.

Underlining that he expects Biden’s priority to be “overwhelmingly domestic” with emphasis on dealing with the economic and health effects of the COVID-19 pandemic, Falk said the US’ new president would “try hard to avoid the distractions of adopting controversial foreign policy positions.”

“Even more troublesome than the Middle East, is an escalation of tensions with China,” he added.

On US-Israel relations and Washington’s position on the Palestine issue, Falk said it “seems likely” that Israel would continue to exert a strong influence on US policy towards the region, noting that the Biden leadership had promised to “consult with Israel before making any new policy moves in the region.”

On this note, Falk commented on the previous administration’s so-called “deal of the century,” saying: “The Trump plan was essentially a demand that Palestinians agree to political surrender with respect to their struggle for basic rights in exchange for some economic assistance in improving the quality of their daily lives.”

“In the post-colonial age of robust nationalism to expect a people to accept subordination in their own homeland and renounce their right of self-determination is unrealistic,” he added.

Falk said Trump’s deal “was nothing other than a tactic of geopolitical bullying, not genuine peacemaking.”

Encouraged by the former president’s proposal, Israeli Prime Minister Benjamin Netanyahu announced last May that Tel Aviv would formally annex the Jordan Valley and all settlement blocs in the occupied West Bank.

Palestinian officials have threatened to abolish bilateral agreements with Israel if it goes ahead with annexation, which would further undermine the possibility of a two-state solution.

On a question about the UN’s role falling short in bringing Israel and Palestine to a peaceful solution, Falk cited a UN resolution passed during the former US President Barack Obama administration.

“The UN did pass a strong anti-settlements resolution by a 14-0 vote in the Security Council, with the US abstaining, in the last days of the Obama presidency,” he said.

The US’ move was a break from Washington’s long-standing policy of supporting Israel at the UN.

In the past, Washington had used its veto power on the issue. But, the Obama administration’s decision not to turn down this resolution was a first for a measure involving Israel and Palestine.

The 2016 resolution was the “strongest reassertion of UN authority in recent years, yet it led nowhere when it came to implementation,” Falk said.

Reminding of Israel’s unswayed position on international law or UN directives, the Princeton scientist said “it [Israel] has provocatively challenged the Biden presidency by approving 3,000 new permits for unlawful settlement construction, many of which are situated deep in the West Bank, signaling Israel’s refusal even to consider the establishment of a viable Palestinian state.”

“It is important that the UN agenda continue to document Israeli wrongdoing as this will encourage and legitimize civil society activism. It is only Palestinian resistance from within and global solidarity from without that can have any prospect of achieving Palestinian rights and a peaceful future for both peoples.”

On possible global demilitarization and peace, Falk said: “Under these current conditions, I am not hopeful about achieving world peace. I do think some fires can be contained or even extinguished as in the Middle East, although others are likely to break out, and that progress can be made in dealing with such issues as climate change, biodiversity, and migration.”

He said the US “was emotionally strongly connected with excessive investments in a militarized conception of global security,” with American gun culture rooted in the Second Amendment of the country’s Constitution, adding that this in turn depended, for “budgetary justifications,” upon “exaggerating security threats to vital American interests.”

Falk said a “needed demilitarizing readjustment in security policy is not likely to occur,” in the US, explaining that the “economic and technological dynamism of China threatens US global primacy in ways for which there seems to be no effective response other than relying on geopolitical confrontation, dangerously threatening a second cold war.”

“US militarization has made no policy re-evaluation even in the face of several setbacks in recent years, including Afghanistan, Iraq, and Libya. This suggests that the current American political and moral imagination remains locked within a military box. Only a strong social movement for greater societal protection and domestic investment will crack this militarist consensus, but until this happens, I see little hope.”