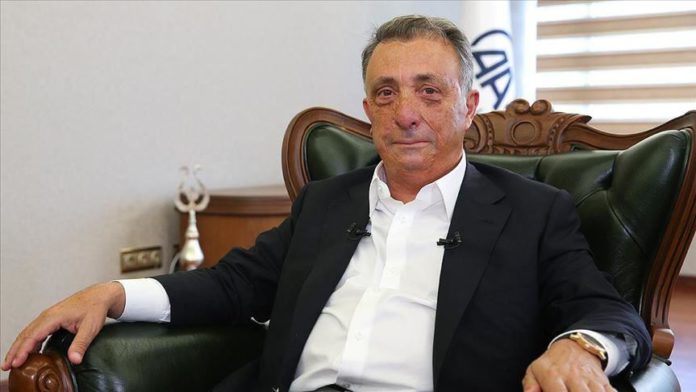 The chairman of Turkish football club Besiktas said on Tuesday that the Black Eagles succeeded in the 2019-20 season even though they came third in the Super Lig campaign.

“Jumping from 13th [spot] to 3rd place is a success, but not being a champion [in Super Lig] is also a source of unhappiness for us,” Ahmet Nur Cebi told Anadolu Agency’s Sports Desk.

Besiktas is one the leading football clubs in Turkey, having 15 league titles in history. They last won the Super Lig in 2016-17 season.

Separately Cebi said that the Istanbul club’s board decided to donate 10 million Turkish liras (approximately $1.43 million) to the club, and that he will also give 3-4 million liras as part of a charity campaign.

In June, Besiktas launched a fundraiser to tackle growing debt as the club’s chairperson Cebi previously called fans to join it.

Persons, who want to donate money to Besiktas, can send phone messages as one SMS was 20 Turkish liras or $2.8.

Cebi also talked about the transfer negotiations as their Turkish forward Burak Yilmaz wanted to play for French team Lille.

He stated that the parties, Besiktas and Lille are currently talking about the technical details and Besiktas will voice Yilmaz’s move once it’s completed.

Yilmaz, 35, is one of the most experienced forwards in Turkey, playing for Besiktas, Fenerbahce, Trabzonspor and Galatasaray.

Cebi, referring to the defenders Caner Erkin and Gokhan Gonul, said that if the Turkish pair wants to play for Besiktas, the club’s economic conditions are obvious.

Besiktas’ Erkin and Gonul are set to leave club as their contracts will end on Aug. 3, 2020.

Erkin is playing in the left flank meanwhile Gonul is a right back.

Cebi emphasized that Besiktas can no longer pay huge salaries for players.

“Nobody should expect sensational signings,” he also said to refer to the Turkish club’s economic problems.

Cebi also said that he admires the skills of the first team head coach Sergen Yalcin.

“If Sergen wants to spend the rest of his life in here, I believe he will be successful,” Cebi remarked.

Yalcin, 47, was one of the most talented No. 10s in the Turkish football and is also a Besiktas hall of fame.

Following the leave of Abdullah Avci over the poor results in the Turkish league and UEFA Europa League, Yalcin was hired by Besiktas as a caretaker head coach in January.

ANALYSIS – 2021 was very intense for Italy