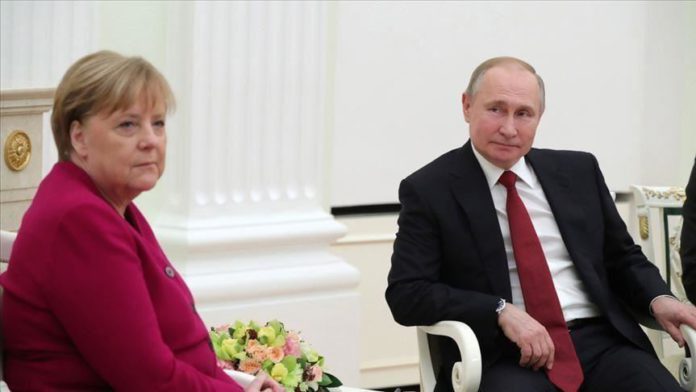 Angela Merkel never had it easy with relations with Russian President Vladimir Putin ever since becoming German chancellor in 2005.

While the German leader tried initially to forge closer ties with Putin, differences on global issues like Ukraine, Syria and Libya foiled those efforts.

That notwithstanding, the German chancellor has, over the years, managed to cultivate a relationship with Putin based on real political pragmatism and mutual respect.

In 2008, the German leader opposed American plans to allow Georgia and Ukraine to become NATO members.

Furthermore, Merkel strongly supported the Nord Stream 2 energy project, with which Russia is to supply gas to Germany and Europe amid fierce resistance from her own EU partners.

So in this way, she maintained a minimum basis of trust with Putin, which enabled Germany to act as a mediator in disputes, often with France, as in the Ukraine conflict, where the sides met in the so-called Normandy format.

However, the rather complex relationship between the two leaders is likely to change significantly with the case of Alexei Navalny and the recent realization that a poison from the deadly nerve agent Novichok was used in the attack on the Russian opposition leader.

The German government said there was a certain probability that Russian government agencies were involved in the attack. After all, they are most likely to have had access to the poison, although final proof is still pending and may never be obtained.

Merkel’s reaction was unusually sharp, given her rather quiet tendencies.

Navalny was supposed to be “silenced,” said the chancellor in a brief statement in front of cameras, and “very serious questions” now arose that only the Russian government could and should answer.

But even before the assassination attempt, the chancellor seemed deeply frustrated at how to react to Russian provocations.

This was clearly heard during a question-and-answer session in the German parliament in May.

Shortly before, it was revealed that the Russian military intelligence service was responsible for a cyberattack on the German parliament in 2015, and two e-mail boxes from Merkel’s parliamentary office had also been attacked.

“I can honestly say: It hurts me,” said the chancellor in front of parliamentarians.

After all I try “every day to improve relations with Russia,” added Merkel.

She assessed the cyberattack as just one aspect of Moscow’s “hybrid warfare strategy.”

It was not just the hackers who marred German-Russian relations.

The murder of Zelimkhan Khangoshvil, a Chechen with a Georgian passport, in Berlin in August 2019, led to the expulsion of two Russian diplomats.

German political experts are concerned about the ongoing deteriorating state of relations with Russia.

Political scientist Susan Stewart told the Deutschlandfunk broadcasting network there have been hardly any common interests between Germany and Russia for several years — neither with regard to the international situation nor Ukraine.

Moscow is also working on weakening Germany, for example through cyberattacks, said Stewart, who is a Russia expert at the Berlin-based German Institute for International and Security Affairs.

She stressed that apart from developments in the Navalny affair, German-Russian relations have been severely strained for years.

Stewart pointed out, however, that it was important to maintain dialogue with Russia.

But to do this, a long-term approach would have to be found, also within the EU, in which, so far, there is no consensus on Russia policy, she said.

Germany should use the current EU Council Presidency, but also take initiatives beyond that to launch a dialogue that would lead to more consensus on Russia policy, said Stewart.

Otherwise, Moscow would continue to act as before, the expert warned.

Stewart suggested the EU should carefully analyze Russia’s behavior in recent years — since the annexation of Crimea in 2014 — and, on this basis, initiate a common policy that takes Moscow’s actions into account.

It is important that EU member states bundle their capacities more closely and act as a single actor vis-a-vis Russia. However, the problem is that the US is increasingly failing as an international regulatory power. This enables Russia to further divide the West, according to Stewart.

Within the EU, it is conceivable that sanctions could be levied against persons in Putin’s immediate orbit, as has happened following the poisoning of double agent Sergei Skripal.

A former Russian spy who had defected, Skripal and his daughter were poisoned with Novichok in 2018 in the English town of Salisbury. They both survived.

Sanction threats notwithstanding, the German government is aware Russia is simply too important globally to be politically sidelined by the EU.

While Berlin still looks at Moscow as a key partner in resolving crisis hotspots in places like Syria, Iran and Libya, it also realizes it needs to continue its pragmatic approach in a complicated relationship with Russia.