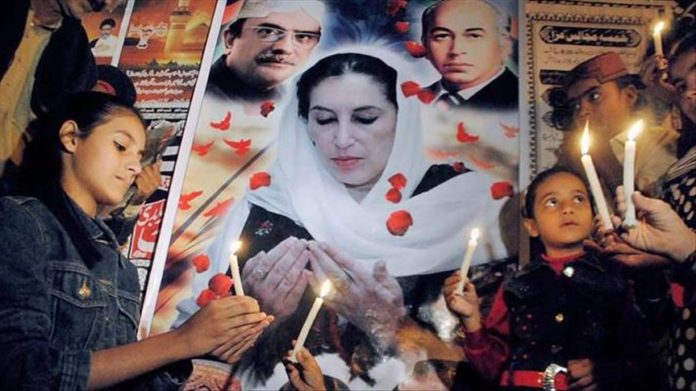 Thousands gathered in southern Pakistan on Sunday to remember Benazir Bhutto, the first woman prime minister of the Muslim world, on her 13th death anniversary.

She was killed in a gun-and-bomb attack in the garrison city of Rawalpindi on Dec. 27, 2007, weeks after she arrived from years-long self-exile in Dubai and London.

Ignoring a government ban on public gatherings due to the coronavirus, supporters of the center-left Pakistan People’s Party (PPP) gathered in Larkana, home town of the Bhutto political dynasty.

Carrying tri-color party flags, and portraits of their slain leader, who served as premier from 1988-1990, and from 1993-1996, charged PPP supporters were also joined by other opposition leaders.

The key figure among those was Maryam Nawaz, the daughter and political heir of the three-time premier Nawaz Sharif, once the main political rival to Benazir.

An 11-party opposition alliance, the Pakistan Democratic Movement, of which the PPP is a part, used the gathering to accelerate its ongoing campaign to oust the government of Prime Minister Imran Khan. They accuse him of coming into power through a rigged election two years ago.

Leaders including Bilawal Bhutto Zardari, the PPP chairman and the son of Benazir, and Maryam lambasted Khan’s government and his policies, which they accuse have led to inflation and energy shortages in the country of 220 million people.

The joint platform has announced resignations en masse, and to hold a long march toward the capital Islamabad if the prime minister does not step down before Jan. 31, 2021. The next general elections, held once in five years, are scheduled for 2023.

US to deploy National Guard to DC for pro-Trump rallies