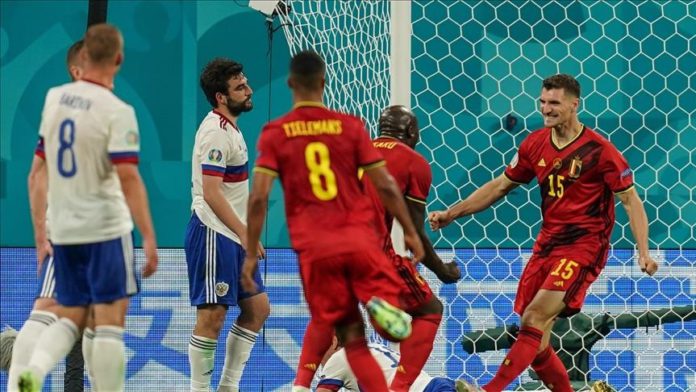 A Romelu Lukaku led-Belgium team defeated Russia 3-0 in a UEFA EURO 2020 Group B match in Russia’s Saint Petersburg on Saturday.

Playing in the forward position, Lukaku, 28, found the net twice in minutes of 10 and 88.

Belgium right back Thomas Meunier scored to make it 2-0 for Red Devils before halftime.

After his first goal, Lukaku ran to a stadium camera on the touchline to dedicate his feat to his teammate at Inter Milan, Christian Eriksen, who collapsed during a Denmark-Finland match earlier Saturday that Finland won 1-0 in Copenhagen.

The Group B match in Copenhagen’s Parken Stadium was halted after the Danish midfielder collapsed near the end of the first half. After leaving the pitch on a stretcher, Eriksen, 29, was reported to be “stabilized” and conscious in a hospital.

After UEFA resumed the match at the request of both sides, Joel Pohjanpalo, 26, scored the only goal for Finland with a header in the 60th minute.

The football community, including UEFA chief Aleksander Ceferin and Eriksen former clubs Tottenham Hotspur and Ajax Amsterdam, and his current team, Inter, wished him a speedy recovery on Twitter.

Eriksen is a Denmark regular, having scored 36 goals in 108 international caps for his nation since his debut in 2010.

Seen as one of the most reputable players in Europe, Eriksen played for Ajax and Tottenham Hotspur before his move to Inter in 2020.

He helped Inter win the 2021 Italian Serie A title.

Saturday’s losing nations Denmark and Russia did not gain any points in the group.

On matchday two, Finland will take on Russia on Wednesday.

Denmark will play Belgium on Thursday.