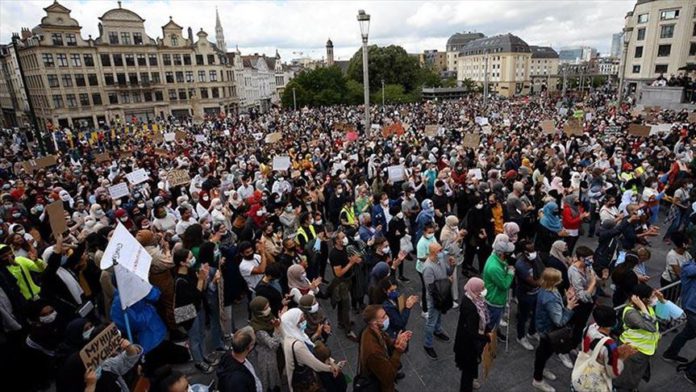 Some 1,000 people took the streets in the Belgian capital on Sunday to advocate for the right to wear headscarves at universities.

The protest targeted a recent constitutional court ruling that allows a ban on religious symbols in higher education.

The protest was dominated by young women, including many not covered who wanted to protest discrimination and show solidarity with their peers who wear headscarves.

Protesters carried signs such as “Don’t judge a woman by her cover!” “Why should I be neutral?” and “Where is the freedom if I can’t put on whatever I want?”

Respecting the rules of Belgian authorities, the demonstrators wore masks and tried to keep social distance.

In June, the Belgian constitutional court ruled that prohibiting religious symbols – including hijabs – in higher education does not constitute a violation of freedom of religion or the right to education under the Belgian Constitution and European Convention on Human Rights.

The decision came after a Brussels court referred to the constitutional court the case of a group of Muslim women who challenged the Francisco Ferrer College for not allowing its students to wear head coverings.

However, headscarf bans are not widespread in Belgium.

Several Belgian higher education institutions – including the famous Free University of Brussels (VUB) or Catholic University of Leuven – made clear in July that they welcome students “regardless of gender, origin or social status, with or without a headscarf.”