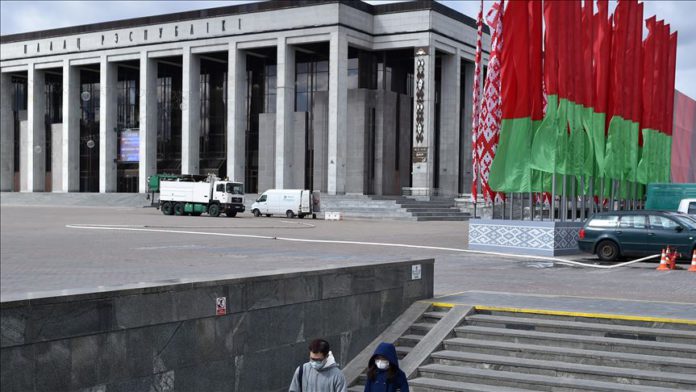 Belarus on Wednesday slapped reciprocal sanctions on individuals from the three Baltic States — Estonia, Latvia and Lithuania in response to similar measures from these countries following protests against the reelection of Belarusian President Alexander Lukashenko.

Belarusian authorities issued the order on the individuals — without divulging their identities — for allegedly interfering in the country’s internal affairs, making “unacceptable” political statements and offering financial support to the government’s opponents, Belarusian Foreign Minister Vladimir Makey told reporters in the Russian capital Moscow following a meeting with his Russian counterpart Sergey Lavorv.

“We’re aware of the list of personal sanctions imposed by the Baltic States. We’ve also conducted interagency coordination and prepared proposals for the introduction of asymmetric sanctions against the relevant individuals from Lithuania, Latvia and Estonia.

“We don’t intend to publish it but there are quite a lot of people included from all three Baltic States, and given the fact that we have a single list of non-entry persons within the framework of the Union state with Russia, I think this should make them think,” he said, adding that if other countries also imposed sanctions, Belarus would reciprocate.

On Monday, Estonia, Latvia and Lithuania announced individual sanctions against President Alexander Lukashenko and 29 other Belarusian officials over confrontations with the country’s opposition. The sanctions are known to include travel bans but can also contain other measures.

Makey admitted that the confrontation between the authorities and the opposition continued in Belarus. However, the attempt to organize “a color revolution under the Ukrainian scenario” failed, he said.

In turn, Russia’s Sergey Lavrov condemned the pressure that “some Western states are exercising on Belarus’ government” while supporting the opposition.

“Dubious ideas about mediation are being imposed on the country, the people, and the leadership of Belarus, including via the OSCE line, which itself is experiencing a deep crisis and needs to be reformed. And which, if we talk about the OSCE, was unable to fulfill its obligations to ensure international monitoring of the presidential elections of the Republic of Belarus,” he said.

Lavrov joined Makey in his assessment about the “unacceptability of interference” in Belarusian internal affairs or the imposition of “intrusive mediation services” against the will of Minsk and the Belarusian leadership.

“We consider it essential to allow the Belarusian people to understand what is happening on their own,” he said.

Lavrov also said mediation by the West in Ukraine in 2014 had led to protesters pushing President Viktor Yanukovich to flee the country several days after sealing a reconciliation plan with the opposition under EU guarantees.

Protests in Belarus broke out after Lukashenko was declared the winner in the Aug. 9 presidential elections. Opposition candidates, however, accused the administration of rigging the poll.

NATO and European leaders have urged Lukashenko to start dialogue with the opposition, and respect the people’s fundamental human rights.