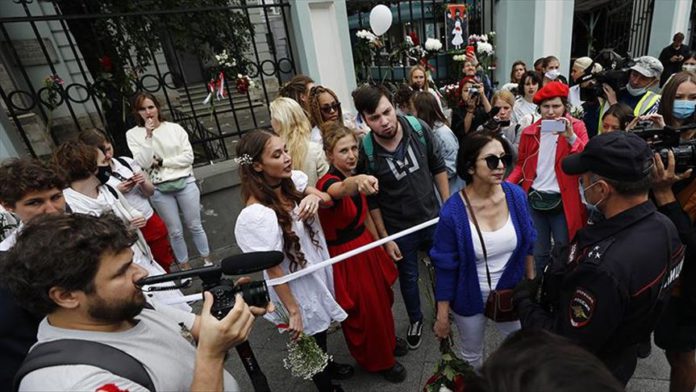 Nearly a week since Belarus’ contested elections, protests against the results continued Saturday.

A flower-laying ceremony was held in memory of a protester who died in clashes with police at Pushkin Square in Minsk. Hundreds of people attending the ceremony left flowers at the spot where the protester died.

The country’s Interior Ministry said earlier the protestor lost his life on Aug. 10 when an explosive he intended to throw went off in his hand.

President Alexander Lukashenko also criticized protesters who he said threaten the families of soldiers and the police.

Lukashenko asked the protesters not to harm innocents.

He also rejected offers of mediation from abroad.

“We have a normal government formed according to the constitution. We don’t need any foreign government or intermediaries,” he said.

With tens of thousands attending demonstrations throughout the week, the EU repeatedly urged Belarusian authorities to halt violence against peaceful protesters.

The Central Election Commission published the final results on Friday, according to which incumbent Alexander Lukashenko won with 80.1% of the vote, while opposition leader Svetlana Tikhanovskaya came in second with only 10.12%.