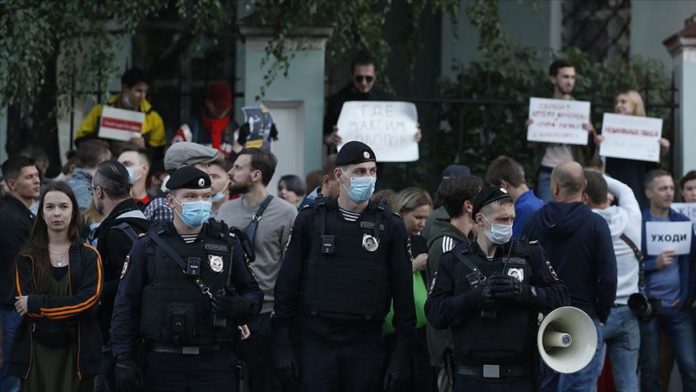 Protests against the results of Belarus’ presidential election saw their eighth day on Sunday.

Thousands of protesters, without security forces intervening, shouted slogans against President Alexander Lukashenko carrying the red and white flags Belarus used before 1995, including some flown on bridges and buildings.

In a rally in front of a government building, Lukashenko said he was first elected president in the 1990s when Belarus faced dire economic straits.

“You asked me, a very young, inexperienced person, to push the nation away from the abyss,” he said.

“We did this. We made the dreams of millions come true. We established an independent and sovereign state for the first time in our history.”

He claimed that regional neighbors Lithuania, Latvia, Poland, and Ukraine are pushing to redo Belarus’ election, adding that if the election is held again like they want, this would destabilize the country.

Saying that NATO is beefing up its military presence on Belarus’ western borders, he stressed the country’s independence and sovereignty.

Calling on the opposition and the other candidates to consider the views of the people, he argued that it is not possible to manipulate the elections.

In official election results released Friday, Lukashenko won with 80.1% of the vote, while opposition leader Svetlana Tikhanovskaya came in second with only 10.12%.

UK virus shows no signs of causing more deaths: WHO