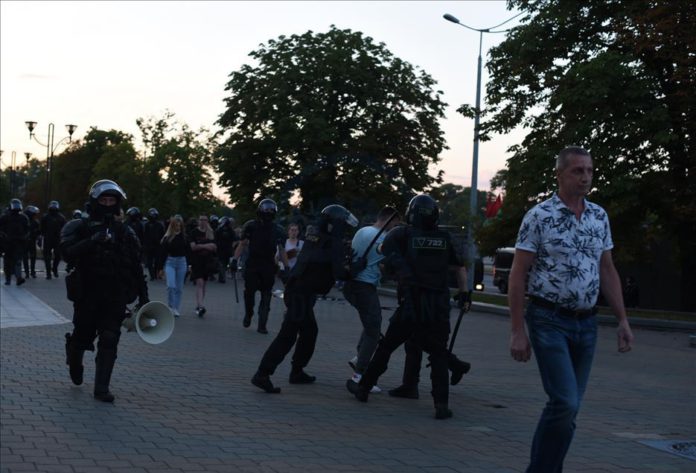 MINSK, BELARUS – AUGUST 10: Protestors continue their unauthorized demonstrations at streets despite police intervention, after the early election results in Minsk, Belarus on August 10, 2020. Belarusian President Alexander Lukashenko won a sixth term in office with over 80% of the vote, the country’s election commission said Monday. Officials maintain the results are valid, however, the opposition candidates protested the results, supported by thousands of people who took to the streets throughout the country. ( Marina Serebryakova – Anadolu Agency )

The ministry said special forces units intervened in the unauthorized demonstrations in the capital Minsk and that demonstrators and security forces frequently confronted each other.

The protestor lost his life after an explosive went off in his hand which he was trying to throw at security forces.

Those who protested against the uncertain results in the presidential election continued their unauthorized demonstrations throughout the night despite police intervention.

The protestors resisted the security forces by throwing Molotov cocktails and stones. They also set up barricades made of iron bars and garbage cans on some streets and burned car tires.

There were injuries in the clashes between the police and demonstrators, and many protesters were also detained.