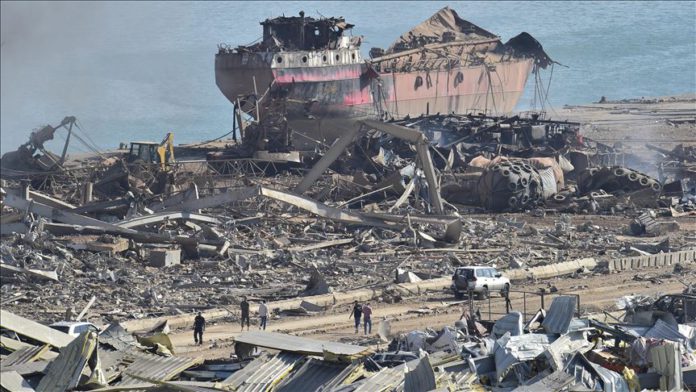 At least four Bangladeshi migrant workers were killed and 80 others wounded in deadly explosion in a warehouse at a sea port in Lebanon’s capital Beirut on Tuesday, according to official sources.

“We are constantly monitoring the treatment of our injured nationals and providing financial support for them. Our foreign minister AK Abdul Momen also proposed for sending medical and food assistance for Lebanese government,” Md. Jahangir Al Mustahidur Rahman, Bangladeshi envoy in Beirut, said in a video statement on Wednesday evening.

He added that at least 80 others — including 21 soldiers of the Bangladesh Navy — were wounded in the devastating explosion. “Of the injured workers, eight are still under treatment at Lebanon’s Rafik Hariri University Hospital.”

“The devastating blasts have caused huge damages, killing nearly 100 and injuring over 4,000, including those Bangladeshi nationals,” Rahman said.

According to government data, around 150,000 Bangladeshi migrant laborers are currently working in Lebanon.

“One of the injured is in a critical condition who has been admitted to the American University of Beirut Medical Center while the others shifted to Hammoud Hospital [south of Lebanon].”

It added: “We are calculating in detail damages to the Bangladeshi naval ship BNS Bijoy.”

Bangladeshi Navy’s warship has been participating in the UN peacekeeping mission in Lebanon since 2010 to stalk the supply of illegal arms and ammunition in Lebanon through the Mediterranean route, the statement said.