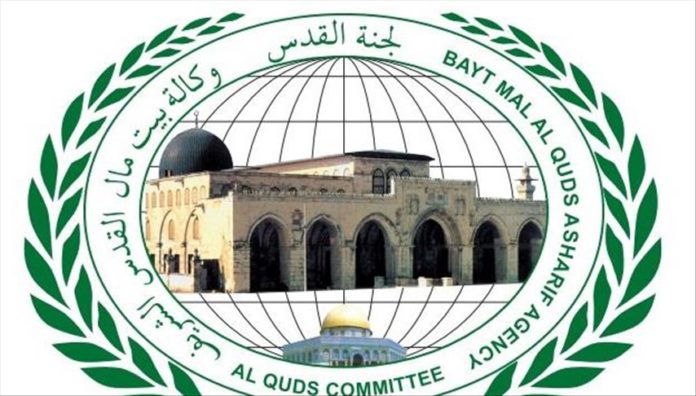 The Bayt Mal Al Quds Agency was an initiative of the late King Hassan II of Morocco that was accepted by the Organisation of Islamic Cooperation (OIC) in December 1995 and officially commenced its activities in July 1998.

Its first meeting was held in February 2000 under the auspices of Morocco’s King Mohammed VI, who is also the chairman of the Al-Quds Committee.

A field arm of the Al-Quds Committee established in 1975 and permanently chaired by the king of Morocco, the agency seeks to salvage the city of Jerusalem, safeguard Muslim holy sites in the city and in particular Al-Aqsa Mosque, protect the city’s cultural, religious and urban heritage and extend assistance to Palestinians in the city.

The agency acts as a financial institution specialized in humanitarian and social work and runs a number of projects in Jerusalem in the areas of health, education, housing, women’s affairs, youth, and children, as well as providing special programs for vulnerable groups.

To achieve its objectives, the Bayt Mal Al-Quds Agency implements a wide range of projects in Jerusalem aimed at serving the community there.

The agency also extends its activities beyond Jerusalem to include a number of Palestinian cities. One of the agency’s most important contributions outside Jerusalem is its support for the King Hassan II College of Environmental and Agricultural Sciences in Gaza.

In a recent report, the agency said it has financed a total of $57 million in funds to run several vital projects in the social and cultural fields, education, health and housing “which had a direct and tangible impact on the lives of the population.”

The agency depends on contributions from OIC member states to support its budget and projects. It also receives donations from both public and private bodies as well as individuals and charity centers among other sources.

However, in its report, the agency said the funding it is used to receiving, of which around 87% comes from Morocco, has declined in recent years.

The agency has called on Arab and Islamic countries to provide it with more funding to enable it to meet part of the growing needs of the residents of Jerusalem in various social fields.

It reiterated its commitment to continue serving Jerusalem and its residents despite the financial challenges it is facing.