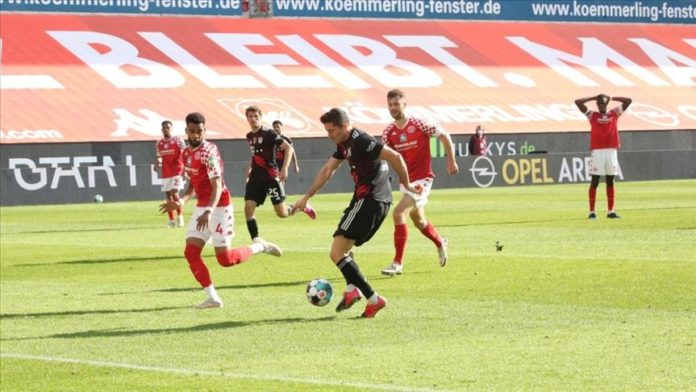 Jonathan Burkardt scored the opener with a right-footed strike in the third minute, and Robin Quaison doubled the gap with a header in the 37th minute.

Near the end of the match, Bayern Munich narrowed the gap to one as Robert Lewandwoski finished in the area, taking advantage of mistakes by Mainz’s defense.

Lewandwoski’s goal was the Polish star’s 36th in the 2020-21 Bundesliga season, but it was Mainz that secured a 2-1 victory.

Bayern Munich have 71 points to top the Bundesliga standings, as this season is set to end in three weeks.

If Leipzig lost to Stuttgart on Sunday, Bayern Munich would clinch their 31st league title.

Bayern Munich have been the Bundesliga victors since 2013.

Borussia Dortmund beat Wolfsburg 2-0 on the road Saturday to maintain their hopes of qualifying for the UEFA Champions League next season.

Dortmund are in the number five spot now with 55 points.

Wolfsburg have 57 points to be in the number three position.

The top four clubs in Bundesliga will be in the Champions League next season. The fifth team in the standings will qualify for the UEFA Europa League groups.​​​​​​​