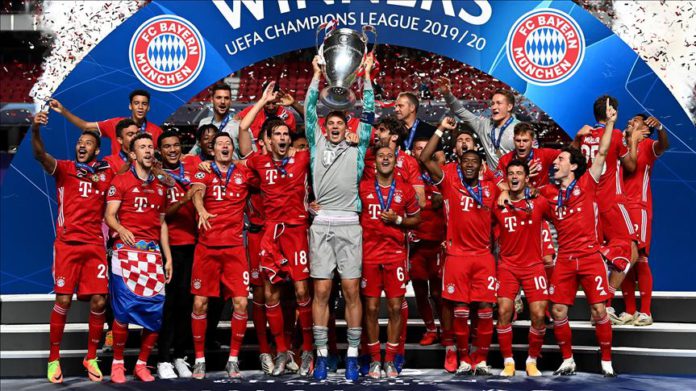 Bayern Munich’s superb season ended with the Champions League trophy after a 1-0 victory Sunday over Paris Saint-Germain in Lisbon.

Following the appointment of Hans-Dieter Flick as their manager in November 2019, the German club has celebrated 32 wins in 35 matches in all competitions, marking the best record of any manager in Bayern’s history.

Bayern maintained their dominance over the German league this season as they lifted the Bundesliga title eighth times in a row with two matches to spare.

The club collected 82 points in 34 matches and concluded the season 13 points ahead of second-place Borussia Dortmund.

The Bundesliga giants recorded an impressive form in the league by winning the last 13 matches.

Bayern’s Polish striker Robert Lewandowski became the highest scorer in the Bundesliga for the third consecutive time with 34 goals.

Bayern also sealed the DFB-Pokal (German Cup) title for the second cup of the season after beating Bayer Leverkusen 4-2 in the final.

Kingsley Coman’s goal against his former club Paris Saint-Germain sealed a 1-0 win for Bayern to clinch the sixth European Cup/Champions League title in their history.

Bayern also made history by winning all 11 of their games this season in the Champions League. They became the first club to win all their games in a single season on their way to the trophy.

The German club scored 43 goals this season in the tournament. Only Barcelona scored more goals in a single season with 45 in 1999-2000.

Lewandowski was also the top scorer in the Champions League this season with 15 goals.

Bayern are also definitely one of the best teams in Europe this year, winning 25 out of 26 matches in all competitions so far in 2020.

Flick’s team ended this impressive season with the historic treble for the second time in their history.

The German club secured their first treble in the 2012-2013 season by winning the Bundesliga, the Champions League and the DFB-Pokal titles.