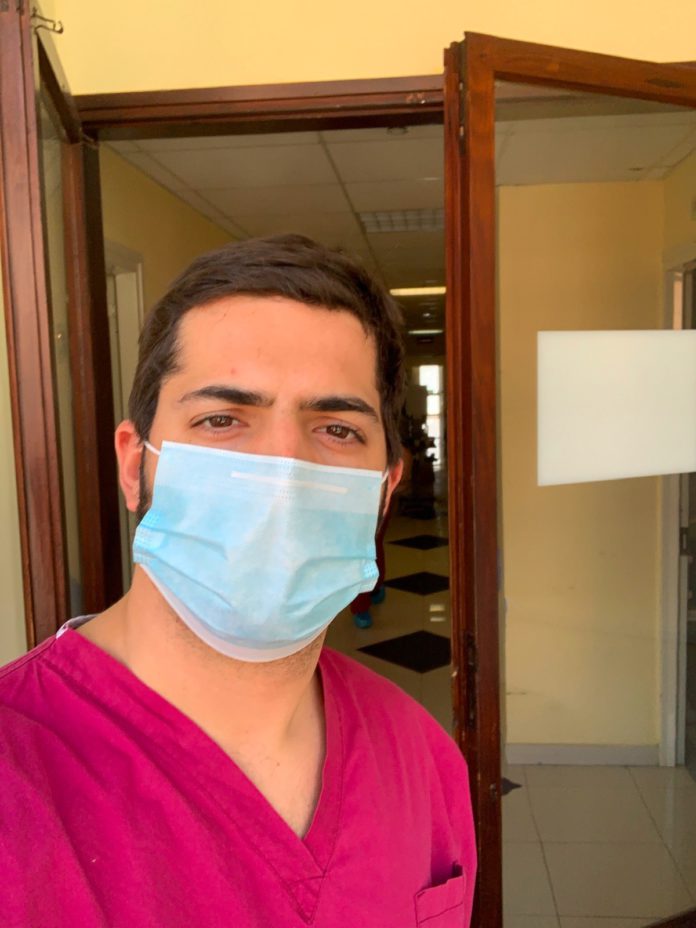 During his endless days as a nurse in the COVID-19 ward of a Roman clinic, Alessio Fantini must be fully covered with special protective equipment, which cannot be removed even to drink a glass of water or take a short bathroom break.

When Fantini takes his gown, double gloves and mask off at the end of his 12-hours shift, he cannot leave behind the solitude he witnessed while treating his patients, all infected with the novel coronavirus.

The lethal virus has hit Italy hard since late February, pushing the country’s health care system close to collapse and claiming more than 27,000 lives, especially among the elderly.

“I was used to deal with death almost daily, as I worked for a hospice providing home palliative care to terminal patients,” Fantini, a 30-year-old nurse with psychiatric experience, told Anadolu Agency. “But this is completely different and sometimes difficult to bear.”

Fantini admitted he fears to be infected every day, but he does not regret his choice of joining the special anti-coronavirus team, created by his clinic to help face the virus outbreak.

The young Roman is just one of the thousands of doctors, nurses and healthcare workers who are battling on the frontline against the outbreak in Italy, which remains the second deadliest in the world.

So far, at least 150 health operators have lost their lives while treating infected patients in Italian hospitals and clinics, a grim death toll that keeps rising every day. Nearly 17,000 health workers have been infected, often due to the lack of adequate protective equipment.

Despite the high risks he faces every day, Fantini did not hesitate when he received a special call for help from his clinic toward the end of March.

“I immediately accepted to become a nurse treating COVID-19 patients,” he said. “That was a gut decision, it was part of me.”

Fantini said he had chosen his job six years ago because he wanted to help people: “Saying no would have been against my conscience.”

However, he was not expecting to see his life change so dramatically, as he started taking care of 20 infected patients, struggling to find ways to establish a personal contact with them.

“We’re all they have, but often they can’t even hear our voices or see our eyes, behind the mask,” Fantini said. He stressed that all infected patients are separated from their families and cannot even receive a last goodbye.

In the private clinic where he works, only two patients — both over 70-year-old — died from COVID-19.

In one of the two cases, Fantini had to follow a sanitizing procedure that moved him deeply, leaving an indelible mark in his mind and soul.

Special health procedures require that the bodies of people who died from coronavirus are sanitized in bed after being naked, using a special bio-chlorine shower. Afterwards, they are moved into bags and handed to the funerary workers.

“The perception is that these people are deprived of their own dignity. That also happens to their loved ones, who cannot even pay a tribute to their bodies for one last time,” Fantini said, with a shaky voice. “It’s hard to put a human body in a bag.”

Fantini and his colleagues, however, try to find occasional rays of light in these dark days, and sometimes they succeed.

“We try to cheer people up, we joke and laugh, even if sometimes they can’t see us,” he said. “We need to cure the soul, not only the body.”

To allow patients to recognize them despite the masks and the gowns, nurses have invented some funny tricks. Fantini, who is a tall and athletic soccer player, sometimes wears a gown with a Batman logo on its back.

“That’s obviously ironic. It’s a way to keep morale high,” he explained. “I can be Batman for my patients, but I don’t want to be considered a hero. That’s my job and I simply do it with passion.”

Fantini recently attracted attention on social media with a Facebook post in which he expressed mixed emotions, including anger. The message quickly became viral, with more than 40,000 shares in a few hours.

He published it at the end of one of his exhausting days — a special one since it was when the clinic registered its first death among its patients.

Fantini recalled “the desolation in the eyes of my colleague, the embrace at the end of the shift, the signs on my face and that smell of bleach that is now part of me.”

He then asked people to stop complaining and be aware of how lucky they are, being at home with their loved ones.

In a desperate effort to contain the massive outbreak, the Italian government imposed in March an almost-total lockdown that forced most of Italians to stay at home.

“I was angry with two kind of people: those who don’t respect the quarantine rules, putting themselves and others at risk, and those who stay on their couch and complain about futile things. In the last month I’ve learned what really matters,” Fantini said.

Amid what he dubbed “our war against the virus,” he recalled a few amazing moments.

“That’s when we learn that our patients have tested negative, or when we succeed in dismissing one of them. Receiving a hug in one of those days is like winning the World Cup, again.”