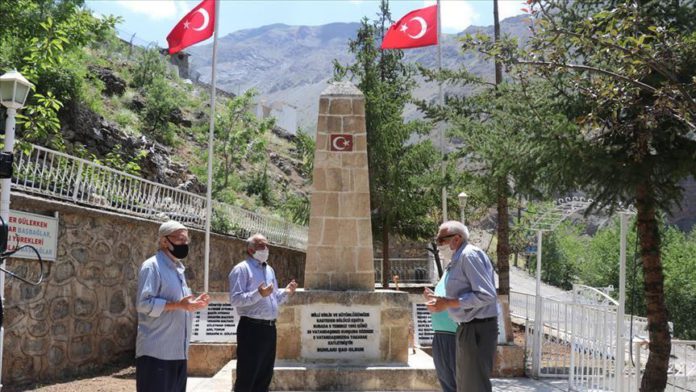 Twenty-seven years have passed since the PKK terror group carried out one of its bloodiest civilian massacres in which a total of 33 civilians were brutally murdered in Turkey’s eastern Erzincan province.

On June 5, PKK terrorists raided Basbaglar village, located 220 kilometers (136 miles) away from the city center. They gathered all women of the village at a nearby stream and set all houses on fire after stealing valuable items. Five people, who challenged the terrorists, were pushed into burning houses and they lost their lives.

The terrorists gathered 28 men, who left the mosque after offering prayers, in the center of the village; and shot them dead. Hundreds of bullet casings were found at the scene.

Ali Akpinar, the mukhtar of the village who survived the deadly incident, said dozens of terrorists sprayed civilians with bullets while chanting slogans.

“Many of our citizens, neighbors and relatives were slaughtered,” he said, adding the terrorists also killed livestock and attempted to destroy the school and mosque in the village.

According to Akpinar, the attack was not a random act of terrorism as it was thoroughly planned. However, he said, terrorists’ attempt to plant seeds of hatred within the Turkish community was rejected by conscious citizens.

Hafize Turkucu, a 57-year-old woman who lost her husband, brother-in-law and several other relatives in the attack, said she saw more than 50 terrorists around prior to the killing of villagers.

“Our houses were burnt, and I was left all alone with five orphans,” she lamented. “Both my children and I have been through a lot.”