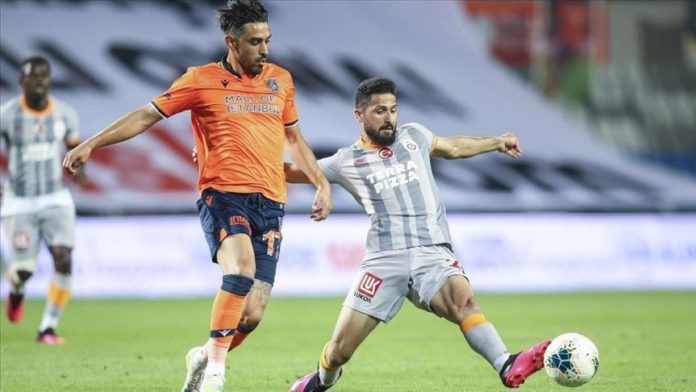 Visitors Galatasaray had been troubled by multiple injuries before this match — including Uruguayan star Fernando Muslera, defenders Christian Luyindama and Marcao Teixeira, and Colombian forward Radamel Falcao — but the Lions managed to slow Basaksehir down.

Basaksehir’s Serbian midfielder Danijel Aleksic broke the deadlock in the 51st minute, scoring for his team with a header, 1-0.

But his goal did not derail Galatasaray as the visitors netted the equalizer in the 67th minute.

Turkish attacking midfielder Emre Akbaba had an easy chance to finish in the six-yard box, 1-1.

In the 85th minute Basaksehir winger Edin Visca was sent off after fouling Galatasaray midfielder Jean Michael Seri. Visca was shown his second yellow card over his tackle.

Galatasaray started to play more offensive, looking for the winning goal after Visca’s exit but the game ended as 1-1 tie.

Following the week 29 match, Basaksehir are now on top of the league with 60 points.

Second-place Trabzonspor had 58 points to pursue the leaders.

Demir Grup Sivasspor are currently in the third spot with 53 points.

Galatasaray, who were in the fourth spot, had 52 points in 29 matches.

During the match, Galatasaray regular Mario Lemina from Gabon was injured.

A Galatasaray youngster Emin Bayram, 17, replaced Lemina in the second half.

Galatasaray’s Norwegian right back Martin Linnes had to go off as he was also injured, and Turkish defender Sener Ozbayrakli signed in.

In the other match of the day, Hes Kablo Kayserispor beat powerful opponents Demir Grup Sivasspor 2-0 in the away match.

Kayserispor have been seeking an exit from the league’s relegation zone.

The team from central Turkey had 28 points to be in the 16th spot.