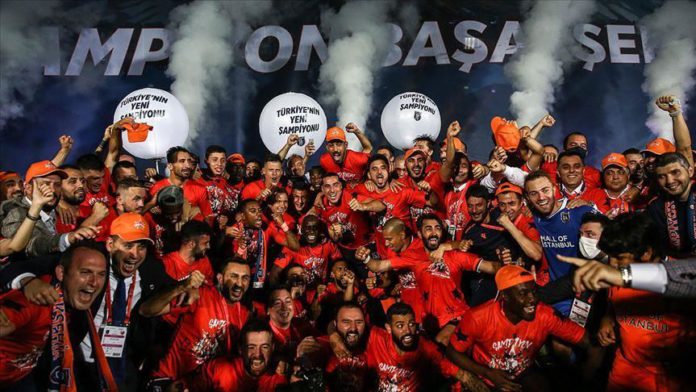 The Istanbul side increased their points to 69 with a 1-0 win over Hes Kablo Kayserispor in a week 33 game, as they were crowned Turkish league champions with one game of the 2019-2020 season remaining.

Basaksehir became the sixth team in the history of Turkish top flight to win the Turkish league trophy, alongside Galatasaray, Fenerbahce, Besiktas, Trabzonspor and Bursaspor.

Galatasaray are the record title winners in the Turkish league, having won the division a total of 22 times. Lions’ rivals Fenerbahce are second with 19.

Thus, the trophy has gone out of Istanbul seven times.

With six titles, Trabzonspor have the fourth-most trophies behind three Istanbul clubs, while Bursaspor gained the Super Lig title once in the 2009-2010 season, marking one of the greatest underdog tales in Turkish football.

He previously reached the championship with Galatasaray in 2008 and Fenerbahce in 2014.

Basaksehir’s manager, Okan Buruk, sealed the Turkish league title as both player and manager, a feat only Ertugrul Saglam, Aykut Kocaman, Hamza Hamzaoglu and Senol Gunes had managed in the past.

Following this victory, Basaksehir earned a place in the Champions League group stage for the first time in their history.

Basaksehir have been unbeaten in the last 16 matches at home, suffering their only defeat at Fatih Terim Stadium this season with a score of 2-1 against Fenerbahce in August 2019.

They recorded 12 wins and four draws in the last 16 games at home.

The Istanbul club have the division’s best defense, becoming the lowest-conceding club with 31 goals in 33 matches so far this season.

They will face Copenhagen of Denmark at the Parken Stadium on Aug. 5. in the last-16 second leg game.

The Istanbul side defeated Copenhagen 1-0 at home in the first leg and they will play England’s Manchester United or Austria’s LASK if they reach the quarterfinal.

Out of the total 28 players in Medipol Basaksehir, 23 members of the squad won their first Turkish Super Lig title in their careers.

Brazilian star Robinho had earned the league title in five different countries during his career.

Adding the Super Lig to his collection, Robinho also won the two La Liga trophies with Real Madrid and one Serie A title with Milan, as well as two Brazilian league trophies with Santos and one Chinese league title with Guangzhou Evergrande.