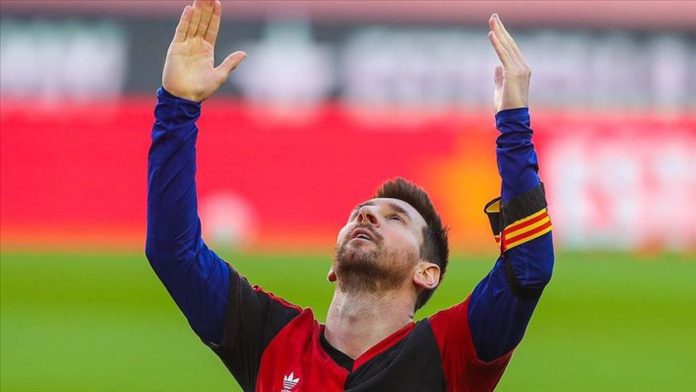 Barca took the lead at home in minute 30 as Martin Braithwaite scored the opener.

Near the end of the first half, French star Antoine Griezmann scored as Barcelona doubled the lead.

Barcelona had the large win over second half goals scored by Brazilian midfielder Philippe Coutinho and Argentine superstar Messi.

Barca have 14 points in 9 matches to reach the 7th position in the league standings led by Real Sociedad, who have 23 points in 10 weeks.

While celebrating his goal, Messi raised his hands to the sky and took his Barcelona jersey off. But he had Maradona’s no. 10 Newell’s Old Boys shirt inside.

With this celebration, Messi paid homage to his fellow countryman Maradona, who was the 1986 FIFA World Cup winner.

The Argentine legend, Maradona, who is regarded as one of football’s greatest players ever, died of heart failure Wednesday at the age of 60.

In Saturday’s match, Real Madrid were beaten by Deportivo Alaves 2-1 at home, a shocking loss for the Whites.

Before the match a minute’s silence was observed to commemorate Maradona.

The visitors took an early lead as Lucas Perez scored from penalty. Jose Luis Mato made it 2-0 in the minute of 49.

Real Madrid midfielder Casemiro put the ball into Alaves net in the 86th minute to encourage his team but The Whites lost the match.

The Madrid club had 17 points in 10 matches to sit in 4th spot in standings.

Separately, Real Madrid’s Belgian star Eden Hazard was injured in the first half. Hazard had to leave the match.

Real Madrid have been troubled by injuries of regulars, Karim Benzema, Sergio Ramos and Federico Valverde.