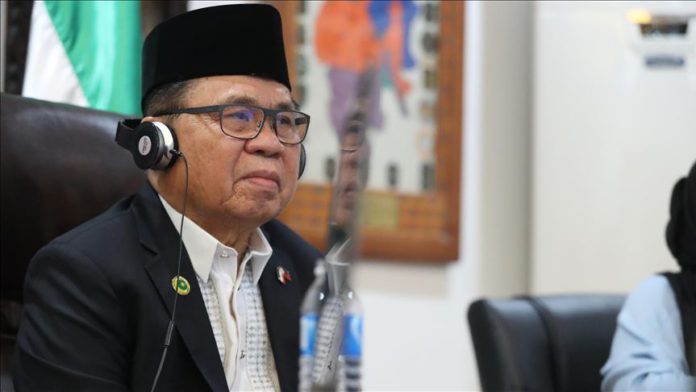 In a statement, Bangsamoro government said Ebrahim met Duterte on Monday in Davao City where the chief minister briefed the country’s president with “significant accomplishments” of his government.

The discussions included progress of the priority codes and legislative acts that the Bangsamoro Transition Authority (BTA) needs to enact.

The meeting took place after the regional government launched “Bangsamoro Administrative Code [BAC]” last month which will define the structural, functional, and procedural principles and rules of governance of the Bangsamoro Autonomous Region in Muslim Mindanao.

According to state-run Philippines News Agency, the Philippine presidential office has said it would “review the proposed resolution of the BTA urging [Philippine] Congress to extend the Bangsamoro transition period from 2022 to 2025.”

Ebrahim is said to have “expressed support” for the resolution.

“The meeting [between Duterte and Ebrahim] also covered the emerging challenges in the peace process and the opportunities for partnership and collaboration in moving forward,” the Bangsamoro government statement said.

After passing the BAC in the local legislative assembly, Ebrahim had said: “In one of its basic principles and policies, the BAC provides that the Bangsamoro government, in pursuit of moral governance, shall maintain honesty, integrity, transparency, and accountability in governance and take positive and effective measures against graft and corruption.”

“The success of this code will not be determined solely by the ruling government, instead, it will highly depend on people to understand the points and provisions of the codes to assure that they are implemented and are not subjected to abuse,” he said.

A historic referendum was held on Jan. 21 and Feb. 6 in southern Mindanao granting autonomy to Moro Muslims.

On Feb. 26, Ebrahim of the newly-formed autonomous region took his post from the central government’s regional governor in an official ceremony.

He was appointed by President Duterte to administer the Bangsamoro Transition Authority through 2022.

With the comprehensive autonomy Muslims will be free in their internal affairs, being able to establish and administer courts of Islamic law within their jurisdiction and manage their surrounding waters jointly with the central government.