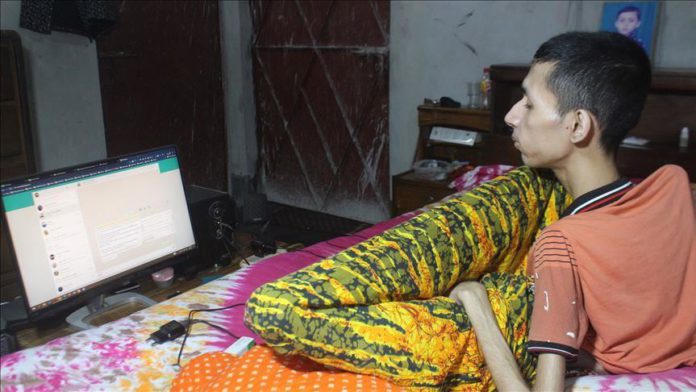 Bangladesh’s “wonder boy,” Fahim Ul Karim, who was inspired by physicist Stephen Hawking and motivational speaker Nick Vujicic and made a name for himself with his abilities as a graphic designer through immense struggle, died Wednesday night in the hospital.

Since 2007, the boy had been suffering from a rare genetic disease Duchenne Muscular Dystrophy (DMD), which eventually impacts all voluntary muscles and affects the heart and breathing muscles in later stages.

Hailing from a low-income family in the remote southwestern district of Magura, Karim traveled to neighboring India with his parents for treatment but had to return home without completing it due to a lack of money.

With only two functional fingers of the right hand, the completely disabled boy never lost hope and started his struggle in 2016 with a laptop that was bought with a bank loan of 45,000 Bangladeshi takas [$536].

On Sept. 7, Anadolu Agency published a feature sketching the inspirational life struggle of 22-year-old Karim, who was called a wonder boy in Bangladesh.

“To date, I have worked with buyers from approximately 30 countries, and I mainly work on print design,” Karim had told Anadolu Agency, adding that on average, his monthly income was $300.

Citing the coronavirus pandemic, Karim said he was the only earning member of his family, adding: “My highest monthly income was $800 before the pandemic.”

Unbridled Karim worked day and night and within two years, he was able to buy property near Magura city, where he also built a small house. Karim also covered all the educational costs of his secondary-level younger sister.

Karim had also told Anadolu Agency that he dreamt of a Bangladesh where everyone has a job.

“My son was an ideal son to me. Allah will always love my son in the next life as I was fully pleased with him,” Rezaul Karim, father of Karim, told Anadolu Agency.

He regretted that he could not fulfill Karim’s last wish for better treatment abroad.

US rolls out Khashoggi Ban, sanctions dozens of Saudis