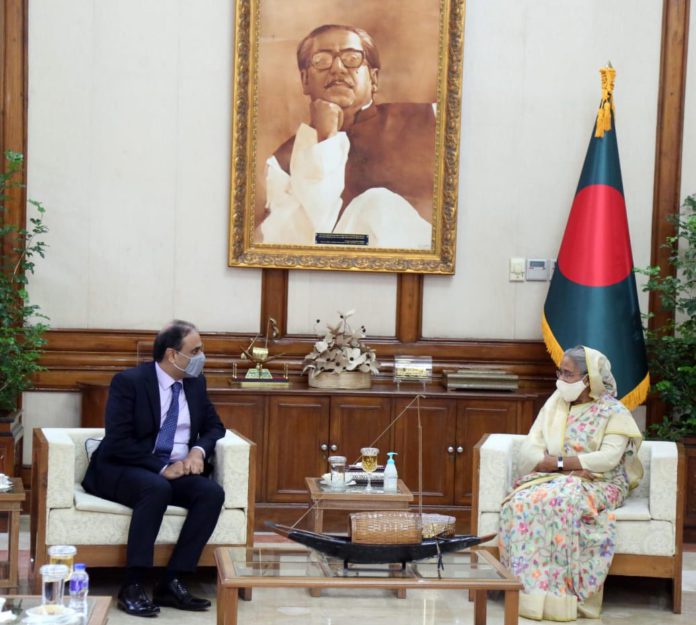 The leaders of Bangladesh and Pakistan are committed to boosting ties, including through high-level visits.
In an exclusive interview with Anadolu Agency, Pakistani High Commissioner in Bangladesh, Imran Ahmed Siddiqui, said leaders of both countries have already invited each other and both sides need to work on materializing exchanges early.

Amid the coronavirus pandemic, officials and top businessmen from both countries also held several international webinars on trade and political relations.

In one, “Pakistan – Bangladesh Economic Relations: Future of Cooperation,” on July 5, business leaders and experts highlighted the prospect of mutual benefits in agriculture, readymade garment and other sectors.

Siddiqui said during the interview he has also shared in detail the scope of trade and cooperation between Dhaka and Islamabad.

“There exists tremendous potential for both sides to cooperate in a mutually beneficial manner in the areas of trade and investment, culture, arts and literature, tourism, etcetera,” he said.

Referring to his frequent interactions with the trade and business community, academicians, and civil society representatives, he said he noticed “a strong willingness to take bilateral ties of both states forward.”

Addressing Bangladesh as one of the top 10 export destinations for Pakistani products, the envoy said: “Bilateral trade between Pakistan and Bangladesh for the year 2020-21 was $721.67 million.”

Of which Pakistan’s exports to Bangladesh in that time were $650.21 million while imports stood at $71.45 million.

One of the top Pakistani businessmen, Ihtesham Javaid, however, during the webinar termed trade volume as “very little, considering the market and opportunities” and urged Bangladeshi investors to come to Pakistan and invest by establishing industries.

During the same platform, Bangladeshi businessman Nabeel Essa said 65% of the Bangladeshi population is involved in agriculture and the country has the potential to enhance and promote agriculture outside with the help of Pakistan.

“King of mangoes comes from Pakistan but Bangladesh has its own 500 types of mangoes,” he said, adding that 80% of the Bangladeshi population is young people and the youth on both sides can connect, not only nationally but regionally and globally.

Currently, the potential products that Pakistan is interested in exporting to Bangladesh on a larger scale include cotton, yarn, fabric, leather, inorganic chemicals, vegetables and electronics.

But Siddiqui would like to see that pool expand.

Underlining agriculture as another very potential sector of mutual benefit, he noted that Pakistan’s agricultural sector is well-integrated into the overall economy and Bangladesh is also a country where most of the population depends on agriculture.

“Joint research on agriculture can greatly benefit both countries,” he said.

“There is a need to address various NTBs [Non-tariff barriers] to trade, including restrictions on Bangladeshi visas for Pakistani businessmen that hamper the realization of true trade potential,” he pointed out.

The two South Asian Muslim states gained independence from British-ruled India in 1947, based on religion, but they went through a bitter experience on different issues and ultimately Bangladesh separated from a united Pakistan in 1971 following a nine-month war.

“Bilateral relations even between the two closest countries are not always friction-free. There may be some problems between Pakistan and Bangladesh, too. But fortunately, the leaderships in both countries are committed to moving ahead and to promoting better relations,” said Siddiqui.

Pakistani Prime Minister Imran Khan wrote to Hasina in March about Bangladesh’s Golden Jubilee in which he “recalled the far-sighted vision of reconciliation and friendship between the two countries so dearly cherished by the leadership of the two countries.”

Referring to the invitation in the letter from Khan to Hasina, Siddiqui said: “We believe a visit by Honorable Prime Minister Hasina to Pakistan would provide an impetus to our bilateral ties.”

He added that the response of Hasina to Khan was also very cordial.

“Prime Minister Sheikh Hasina, while accepting the invitation, also invited premier Imran Khan to visit Bangladesh at a mutually convenient time,” he said. “Both sides need to work on materializing these exchanges early. On our part, we remain ready to extend any support towards this end.”

For bolstering bilateral ties he also emphasized revitalizing stalled consultative mechanisms as well as enhanced people-to-people contacts and added that in 2020 both premiers exchanged views on the evolving COVID-19 situation and shared strategies to address the pandemic.

“Our foreign ministries and foreign secretaries also discussed this and other issues last year on phone,” he said.

Both countries are also working on how to activate the long inactive Joint Economic Commission — a group exploring bilateral cooperation in business and trade — and are interested in moving together to achieving “all relevant Sustainable Development Goals (SDGs),” including poverty alleviation and ensuring good health, quality education, and gender equality, in a timely fashion.