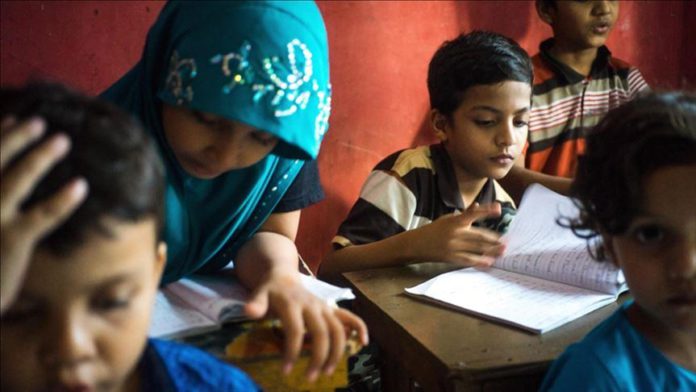 Bangladeshi woman Rima Sultana Rimu, named one of the 100 inspiring and influential women around the world in 2020 by the BBC, dreams of educating Rohingya children.

The daughter of a farmer from the remote southern area of Ramu in Cox’s Bazar district has played a significant role for the last three years in providing education to women and children in Rohingya camps deprived of formal studies.

“As a human being I feel that the people who have taken shelter in my country should enjoy basic human rights like education and I have started my struggle to educate Rohingya children amid various limitations and difficulties,” Rimu told Anadolu Agency.

Underling the illiteracy rate as very “alarming” among the persecuted Rohingya community in crammed makeshift settlements in Bangladesh, she said: “When I observed that most of the Rohingya people are fully illiterate and even children were being grown up without education, I have taken the initiative to educate them being inspired by my human instinct.”

Tens of thousands of Rohingya children and teens in Bangladesh’s camps are being raised without proper education and have to lead a sub-human life in squalid makeshift camps without a dream for a future.

A 2019 joint report by the UN refugee agency, UNHCR, International Organization for Migration, and UN Office for the Coordination of Humanitarian Affairs, said almost half of the 540,000 Rohingya children under the age of 12 are currently missing out on education altogether, while the remainder has access to only very limited schooling.

An internal report by Bangladesh’s army in September 2019 said there are 400,000 children between 12 and 17 years of age in camps who are not receiving education.

Amid global concerns about education in the world’s largest refugee camps, the Bangladesh government in January permitted concerned aid agencies and NGOs to use the Myanmar curriculum to teach children primary level education at learning centers in the camps.

Rimu warned that Rohingya children have been raised without education in the meantime. “It hurt me a lot when I observed that most of the destitute Rohingya people even are not able to sign a signature and children are being grown up without minimum education. I could not stay silent,” she said.

She pointed to the necessity of an educated mother for the existence of a nation and said: “I dream to educate all Rohingya girls along with both male and female babies.”

Rimu believes today or tomorrow Rohingya would return to their homeland. “If they go back to their own country with an educated young generation, they will be able to survive there as a dignified nation. Otherwise, despite peaceful repatriation, the destiny of Rohingya will remain unchanged.”

The BBC said of Rimu: “Rima Sultana Rimu is a member of Young Women Leaders for Peace in Cox’s Bazar, Bangladesh. This programme, part of the Global Network of Women Peacebuilders, aims to empower young women from conflict-affected countries to be leaders and agents of peace.”

Underling Rimu’s role in the camps, it added: “Rima responded to the Rohingya refugee crisis in her community by advocating for gender-responsive humanitarian action.”

Milestone for other women

Hailing Rimu’s struggle as a milestone for other females, Sheuly Sharma, Executive Director of Cox’s Bazar-based NGO, Jago Nari Unnayan Sangstha, or Rising Women Development Agency, told Anadolu Agency: “In a conservative area like Cox’s Bazar, Rimu has set an example that females can contribute in the society equally like males.”

Sharma said due to the spread of education among Rohingya refugees in camps, there is also a tremendous change in aide services. “Most of the Rohingya at preliminary stages used fingerprint during receiving relief. As a result, very often they were deprived, and even there were some mismanagements.”

Echoing Sharma, Rimu said as a result of three years of struggle “many uneducated Rohingya women and young girls are now able to read English and can receive relief items by signing and reading the cards.”

About her recognition, Rimu said: “I never thought of any such recognition. I engaged myself in this service just as a human being. Now I feel proud and lucky for this honor and it will inspire me and thousands of others for contributing to humanitarian works.”

Rohingya refugees and rights defenders have hailed Rimu’s role in spreading education among Rohingya and other services for the persecuted people.

Prize-winning rights activist Razia Sultana told Anadolu Agency that education is necessary for Rohingya because one day they must return to their homeland in Myanmar’s Rakhine state.

Razia, however, also emphasized formal and higher education for Rohingya along with a primary level of education.

“Higher education must be implemented for youths as it will make them confident and forward the Rohingya society to survive as a dignified and prosperous nation.”

“When a remote girl feels the necessity of education for Rohingya, I expect that the Bangladesh government will also allow higher education for the Rohingya community,” she added.

Amir Ali, who was a secondary level student during the exodus of Rohingya to Bangladesh following the military crackdown in Rakhine State, told Anadolu Agency that Rohingya expects the opportunity of higher education by the Bangladesh government.

“As Bangladesh has spread a fraternal hand to us and sheltered us on its land, we expect that such a broad-minded country would never want us to stop education here,” said Ali.

Khin Maung, the founder of Cox’s Bazar-based Rohingya youth association, hailed Rimu’s recognition as a great success for Bangladesh as well as Rohingya and said that such “noble jobs of Bangladeshi youths will help Rohingya to stand up and dream for future leaving all sorts of despair.”