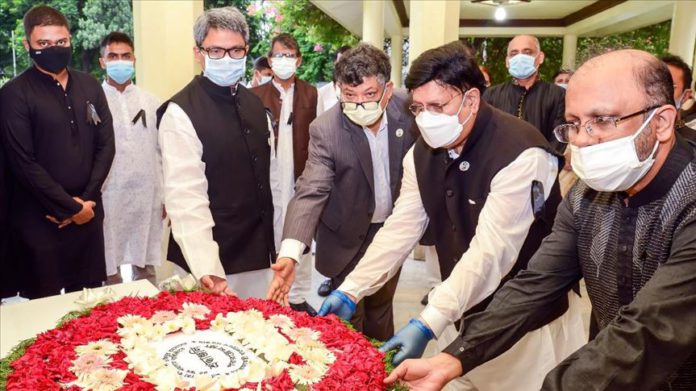 Vows for retribution for his fugitive killers rang out across Bangladesh on Saturday as the country marked the 45th anniversary of the assassination of its founder Sheikh Mujibur Rahman.

Mujib, the first prime minister of Bangladesh and the country’s president at the time, was murdered by a group of army officers in a coup on Aug. 15, 1975.

At least 12 people were sentenced to death for the murder – six have been executed so far, with the latest in April this year, while one died in Zimbabwe in 2001, and five are still on the run.

Mujib, known in Bangladesh as “Bangabandhu” or “Friend of Bengal,” was shot dead at his house in the capital Dhaka, along with 18 family members, including his wife, three children, and brother.

The only survivors of his family were his two daughters – current Bangladeshi Prime Minister Sheikh Hasina and her younger sister Sheikh Rehana – who were abroad at the time.

Hasina paid rich tributes to her father in a message on his death anniversary, which is commemorated as National Mourning Day in Bangladesh.

She laid a floral wreath at a memorial in Dhaka as a military contingent presented a salute in a ceremony that was scaled down this year due to the coronavirus crisis.

Obaidul Quader, secretary general of the ruling Awami Muslim League, said the government was using all political and diplomatic means to bring back the remaining five convicts who are in hiding overseas.

“I want to assure the nation that we will bring back the five killers of Bangabandhu from abroad to execute their death sentences. Political and diplomatic initiatives have been strengthened to this end,” he told reporters.

The Bangladeshi Foreign Ministry also said in a statement earlier this week that it was pursuing diplomatic routes for the repatriation of the convicts.

Special prayers and other events to commemorate the founding father’s life and legacy were organized with adherence to the government’s COVID-19 safety guidelines.

The state-run radio and television channels ran special programs throughout the day, while the Bangladeshi flag also flew at half-mast at government buildings and foreign missions of Bangladesh.