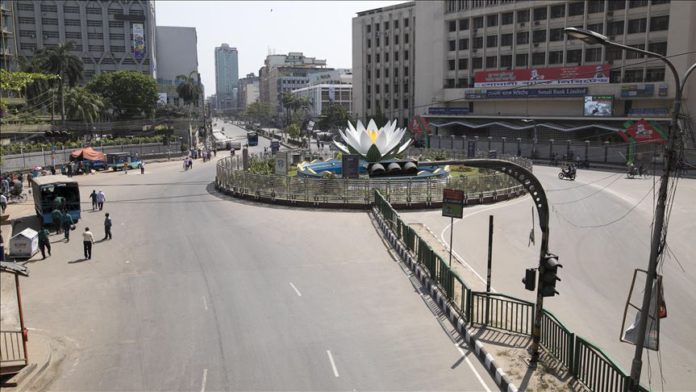 The death toll from coronavirus in Bangladesh crossed the 1,000 mark on Wednesday, the Health Ministry said.

With 37 new fatalities over the past day, the death toll stands at 1,012, said Nasima Sultana, a senior health official, at an online news conference.

Besides, the South Asian nation has reported 3,190 positive cases of the novel virus, the highest-single day figure so far, taking the tally to 74,865.

Health officials have done 15,900 tests nationwide, a minuscule figure in the densely populated country of 165 million.

The government has launched an online plasma network Shohojoddha to facilitate plasma donors and recipients in Bangladesh. The component of blood rich with anti-bodies when taken from recovered patients can help infected people fight the virus.

Another doctor died of COVID-19 on Wednesday, raising the death toll among health workers to 25, according to a doctors’ association.

Dr. Shahed Rafi Pavel, chairman of Bangladesh Doctors’ Foundation, told Anadolu Agency that 1,146 physicians have contracted the virus while serving at medical facilities across the country since March.

Some 594 physicians have gone on to make a recovery, he added.

Infections among law enforces are also at an all-time high with more than 7,000 cases among police.

At least 19 police officers have died so far, according to Bangladesh Police Headquarters.

Authorities have decided once again to impose lockdown based on color-coded zones.

On May 31, the government lifted lockdown after more than two months to allow economic activity, but infections have since surged.

Greece to expel Libya envoy over agreement with Turkey