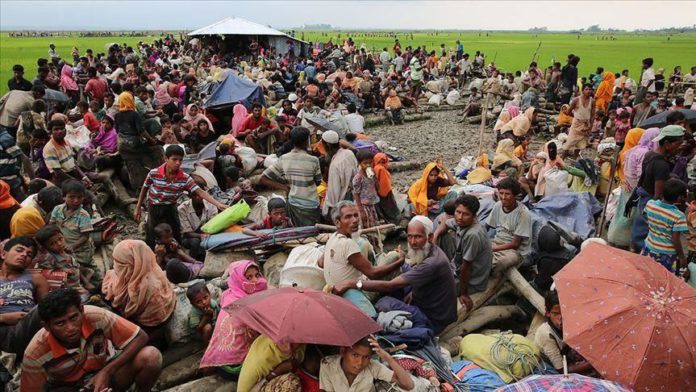 An international rights watchdog urged Bangladesh on Tuesday to return Rohingya refugees kept on a remote island for months to camps in the southern Cox’s Bazar district.

Some 306 Rohingya, including at least 33 children, have been detained on the southern islet of Bhasan Char since early May.

They were moved to the island after being stranded at sea for weeks during a failed attempt to migrate to a third country.

Bangladeshi authorities have cited the coronavirus risk as the reason for not taking them back to the crammed refugee camps in Cox’s Bazar, home to more than 1.2 million Rohingya who fled the August 2017 military crackdown in Myanmar’s Rakhine state.

Having been on the island for over three months, the Rohingya refugees are growing increasingly desperate to be reunited with their families.

“The Bangladesh government has failed to honor its pledge not to involuntarily hold Rohingya refugees on the remote, unprotected island of Bhasan Char,” Human Rights Watch (HRW) said in a statement.

Referring to an early September “go and see visit” to Bhasan Char for 40 Rohingya refugees, the rights watchdog said it interviewed 20 of them after their return to Cox’s Bazar.

“Some said they wanted the refugees detained on the island to be allowed to return with them. Others expressed serious concerns over the quality of medical facilities on the island, the lack of livelihood opportunities, and the safety of the island during monsoon season,” read the statement.

Bangladesh has spent around 23 billion Bangladeshi taka (about $272 million) to develop 120 cluster villages on Bhasan Char to accommodate 100,000 Rohingya there in the first phase.

The remote islet, located in the Bay of Bengal around 50 kilometers (31 miles) off Bangladesh’s southwestern coast, is only accessible by boat and remains totally isolated during rough weather.

Brad Adams, Asia director at HRW, said: “The Bangladesh government is detaining refugees on a remote island, separated from their families, in a callous attempt to claim that it is safe and habitable.”

However, Bangladeshi authorities, including Foreign Minister AK Abdul Momen, have repeatedly claimed that the settlement was completely safe after the installation of protective barriers.

Opposing the claim, HRW called for a feasibility study of the island by international experts from the UN and other international agencies.

“Only by allowing UN experts to conduct a long-promised independent assessment would it be possible to determine the feasibility, safety, and sustainability of the arrangements at Bhasan Char,” Adams said.

– Refugees must participate in decisions affecting their lives

Rohingya refugees in Bangladesh must also be given the right to participate in decisions affecting their lives and speak for themselves, said Amnesty International.

In a briefing titled “Let us speak for our rights”, Amnesty International on Tuesday outlined how exclusion from decision-making is impacting the human rights of Rohingya refugees — from freedom of expression, assembly and access to healthcare and education.

David Griffiths, Director of the Office of the Secretary General at Amnesty International, said: “For decades, the Rohingya were subjected to persecution and discrimination in Myanmar, with hundreds of thousands forced to flee their homes because of crimes against humanity committed against them. Now, three years since their displacement, they are still suffering and prevented from speaking up for their rights.

“While the Bangladeshi authorities have taken many positive steps to support the Rohingya refugees, there is a lack of transparency in decisions, which almost entirely exclude Rohingya involvement. What is needed is a clear policy that is inclusive of Rohingya voices to ensure their human rights are properly protected.”

Amnesty International is also calling on the international community to support and work with the Bangladeshi authorities to develop the policy as part of their international cooperation and assistance to protect the Rohingya refugees.

10 years on, hopes of Syrian refugees hanging by a threat