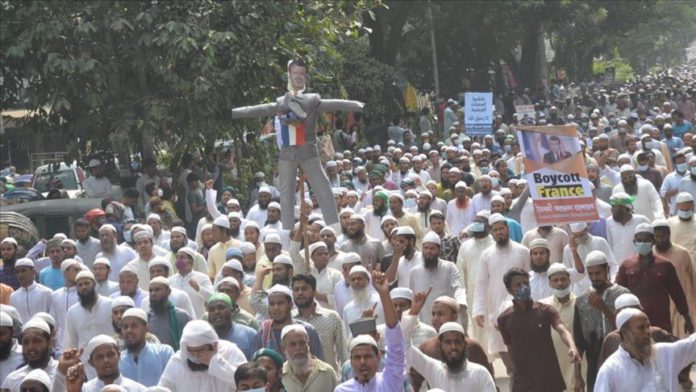 Tens of thousands of Muslims gathered in Bangladesh’s capital Dhaka on Tuesday, with a call to cut diplomatic ties with France and boycott its goods in protest against the acts of republication of caricatures of Prophet Muhammad in France.

The rally was held in front of the Baitul Mukarram National Mosque in Dhaka where tens of thousands joined.

Speakers called on the UN and world community for immediate action to hold peace among religious groups and prevent the French from doing those activities.

Islami Andolan Bangladesh, one of the largest Islamic political parties in the South Asian country, arranged the event as parts of its series of protests against the French government’s recent move which the protesters claimed was an Islamophobic act.

The participants urged the Muslim world to boycott French products and cut ties with the country as long as France does not hold a public apology for the act of depicting Prophet Muhammad.

They alleged French of spreading hate speech in the disguise of exercising freedom of speech.

After holding the protest rally, leaders of the party with thousands of its supporters started moving towards the French Embassy in Dhaka.

Members of law enforcement, however, barred the procession a few yards from the protest ground, and then the protesters returned.

“Give me an example where Muslims spread hate campaign or publish caricatures of any other religious leaders or sacred preachers with the aim of dishonoring them or their religious faiths.

“No, no one could show. it means we Muslims are in favor of peace. So, we urge all not to hurt the heart of Muslims. Prophet Muhammad is in our heart, we cannot tolerate any hate against him,” he added.

He also criticized the Bangladesh government for not giving any official statement against the French stance of the hate campaign against Muslims and their prophet and demanded the diplomatic ties with France to be cut.

The political leader also termed the French act as a hate campaign against Muslims saying that Macron needs mental treatment, similar to the reaction of the Turkish president.

The group in its demands in particular asked the government of Bangladesh to enact a law to punish those who dishonor Prophet Muhammad and Islam.

He demanded the Organization of Islamic Cooperation to pass a resolution in denouncing the Islamophobic act of France.

The protesters will hold rallies across the country also from Wednesday to Friday over the issue.

Meanwhile, university students outside Dhaka, and another large Islamic party, Bangladesh Jamaat Islami, among others, held rallies including in Dhaka and the port city of Chattogram as well as other parts of the country protesting the hate campaign carried out by France.