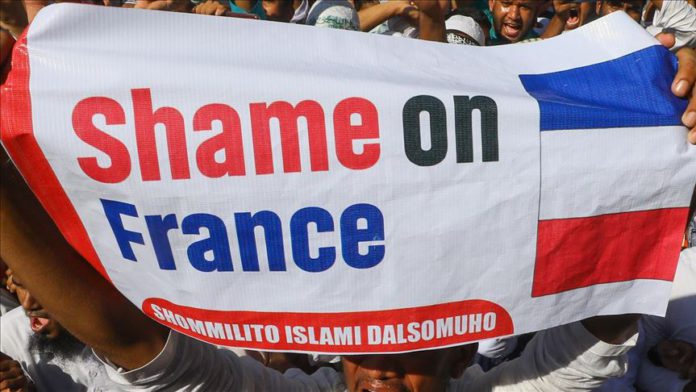 A French politician, widely “infamous” for her anti-immigration stance, in a tweet called for imposing a ban on immigrants from Bangladesh and Pakistan, creating discontent among Bangladeshi authorities which have slammed the politician.

Marine Le Pen’s comments came on Saturday in the wake of massive protests across the world, particularly in the Muslim countries, including Bangladesh and Pakistan, following French President Emmanuel Macron’s comments supporting the republication of blasphemous caricatures of Prophet Muhammad.

Le Pen, the chair of the National Rally political party, on Twitter called for an immediate suspension on immigration from Bangladesh and Pakistan “for the sake of [French] national security” and “in view of the new ultra-violent demonstrations” in these countries.

On Oct. 28, Macron vowed that he would not prevent the publishing of the cartoons of Prophet Muhammad under the pretext of freedom of speech, sparking outrage among the Muslim world.

A French teacher, Samuel Paty, who displayed the cartoons in his class on free speech, was killed on Oct. 22 by a Chechen-origin teenager.

French Muslims have accused Macron of trying to repress their religion and legitimizing Islamophobia.

Meanwhile, for the last couple of days, tens of thousands of Muslims in Bangladesh have been demonstrating in the capital Dhaka as well as other megacities protesting Macron’s comments and calling for boycotting French products.

Last Monday, tens of thousands of people under the banner of Hifazat-e-Islam, one of the largest Islamic non-political groups in Bangladesh, gathered outside the country’s national mosque in Dhaka to protest against anti-Islamic acts in France, including the display of blasphemous caricatures of Prophet Muhammad.

Marched on the city streets and headed towards the French Embassy in Dhaka, the protest rally, however, was barred by law enforcers at the city’s Mohakhali area.

The country’s biggest Islamic political party Bangladesh Jamaat-e Islami and some other organizations also held demonstrations and human chains in a previous couple of days and urged all to boycott French products.

Earlier on Oct. 2, Macron argued that “Islamic separatism” was problematic, and added: “The problem is an ideology which claims its own laws should be superior to those of the republic.”

Like her father Jean-Marie Le Pen, she is mainly known here for her rigid stance in favor of Islamophobia and against immigration, he added.

“We, more than 50,000 Bangladeshi people, mostly Muslims, have been living in France with peace for decades,” Wahiduzzaman said.

Referring to Macron’s recent comments, he added that “it is merely political”.

“With a view to regaining the downfallen popularity, Macron is desperately trying to use the cheap nationalism to gain in the upcoming election.

Speaking to Anadolu Agency, Monnujan Sufian, Bangladesh’s state minister for labor and employment, however, termed Pen’s call for a ban on Bangladeshi immigrants as very “unjust” and “inhuman”.

“They have ridiculed our prophet and it has shocked the Muslim community worldwide. Bangladeshi mass people are also protesting against France’s stance and it’s very normal,” Sufian said.

Marking the call of the ban as Pen’s personal view, Sufian said Bangladesh is not tensed at all for it.

“I hope that the French government will not accept any such illogical and unjust demand. We will also keep our normal ties with France”.

Referring to the ongoing upsurges of Muslims in different parts of the world as “usual”, she added: “As a normal Muslim, it’s our moral duty to oppose any ridiculous practice against our prophet”.

According to the latest media reports, Macron, however, claimed that he had understood the feelings of Muslims who were shocked by the displaying of cartoons of Prophet Muhammad.