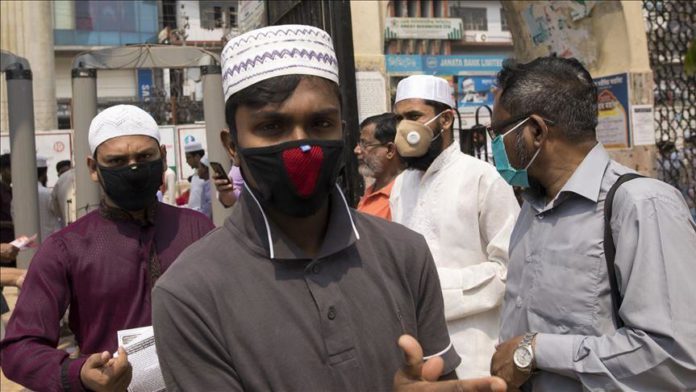 Bangladesh on Monday registered as many as 1,034 cases, for the first time the country registering over 1,000 in a single day since the first case was reported on March 8.

The total number of virus cases stood at 15,691 and death toll at 239, with 11 more fatalities in the past 24 hours, according to the Directorate General of Health Services (DGHS) on Monday.

Meanwhile, 252 patients recovered and were discharged from hospitals over the last 24 hours, raising the total recovery number to 2,902, the directorate said.

Dr. Nasima Sultana from the DGHS, in a regular online briefing, disclosed the latest developments, that the recovery rate was 18.52% while the fatality rate was 1.53% in Bangladesh by Monday.

Meanwhile, the government has expanded the testing lab facilities, she added, saying that some 7,208 samples were tested in the last 24 hours in some 37 labs across the country.

Bangladesh Doctors’ Foundation (BDF) chairman Dr Shahed Rafi Pavel told Anadolu Agency that as of Monday at least 669 doctors and many more other health workers, including at least 403 senior nurses, have tested positive for coronavirus.

Of the total doctors infected, 459 are from Dhaka division alone.

In the meantime, the Bangladesh Police media wing told Anadolu Agency that as many as 1,756 police personnel were infected with the virus appeared to be the most exposed government body to the disease as police is discharging duties standing on the frontline. And, of the total infected police personnel, 207 tested positive in the past 24 hours.

So far, at least seven police personnel died while some 1,103 police members remained under isolation and 4,803 in quarantine. Besides, some 165 police members got released after recovery, it added.

Meanwhile, the Dhaka Metropolitan Session Judge’s Court Monday started a process to launch digital or virtual court proceedings through videoconferencing, first of its kind in Bangladesh amid the nationwide shutdown due to the pandemic.

Earlier, the government approved an ordinance to introduce digital or court proceedings via videoconferencing with a purpose to ease the setback of cases.

A letter has been issued to the Dhaka Bar Association with an attachment of the copy of Supreme Court directives, local The Daily Star reported, quoting a court official.

The Dhaka court will hear the petitions that remained pending at the court from March 29, the report added.

The courts in the country are closed since the start of the nationwide lockdown late March and the official closure of courts will be in effect till May 16.

The pandemic has killed over 283,100 worldwide, with total infections exceeding 4.12 million, while recoveries surpassed 1.42 million, according to figures compiled by the US’ Johns Hopkins University.