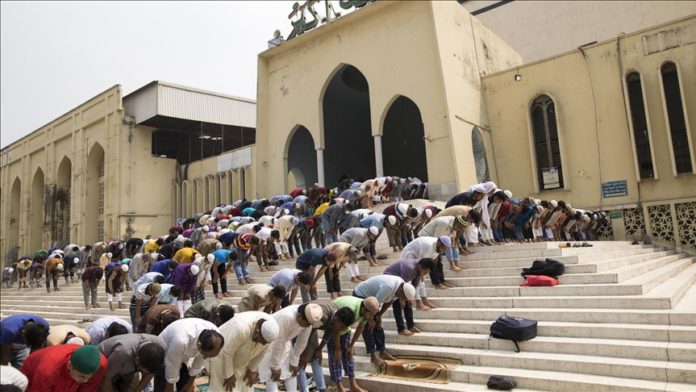 Bangladesh on Sunday barred congregational prayers on the Muslim festival of Eid al-Adha on traditionally-designated open grounds to prevent the spread of the novel coronavirus, according to senior officials.

Authorities announced the decision after an inter-ministerial meeting that, precluding the use of Eidgah — open areas where prayers were usually held en masse — instead urging people to perform prayers in mosques, which are smaller.

The latest decision required carpets to be removed from mosques during the annual prayer, the disinfection of mosque premises before prayers and greater sanitation and social distance measures.

The decision also ordered the elderly, children and those suffering from disease not to attend the prayer.

Another senior official of the ministry, Moazzem Hossain, told Anadolu Agency that authorities would issue a formal order Monday on the decision.

He said the ruling was arrived at via “consultation with experts, officials and religious scholars at the meeting.”

Eid-ul-Adha is expected to be celebrated on July 31 or Aug. 1 in Bangladesh, subject to the sighting of the moon.

The South Asian country on Sunday registered 47 more coronavirus-related deaths, raising the total to 2,352, as well as 2,666 daily infections for a total 183,795.

Besides, some 5,580 people have recovered in the past 24 hours, bringing the overall tally to 93,614 since the first case was detected on March 8.

Number of coronavirus cases in Russia rises past 47,000