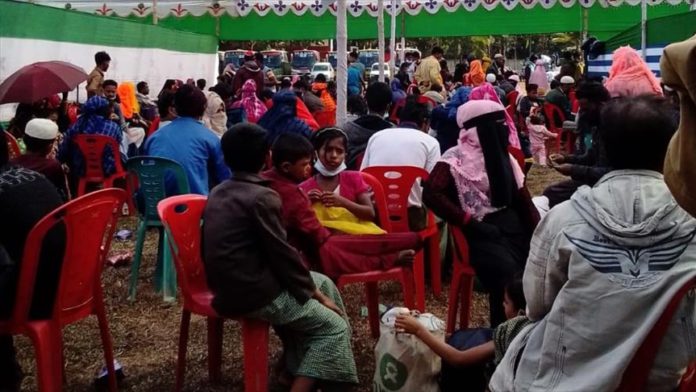 Bangladesh on Monday began relocating the 2nd batch of Rohingya refugees to a remote island, amid concerns from rights groups.

Speaking to Anadolu Agency over the phone, a Rohingya refugee set to be relocated said that 15 buses carrying nearly 1,000 refugees started their journey to Bangladesh’s southern port City of Chottogram from Cox’s Bazar on Monday noon.

“We hope that Bangladesh will keep its commitment to us of providing opportunities of better life with freedom of movement, scopes of earnings, health care and education,” he said, preferring not to be named.

Like the previous Rohingya batch, members of the 2nd group will also stay a night in Chottogram and sail out to Bhasan Char island through the sea route by the host country’s navy ships on Tuesday morning.

“We are fully ready to receive the new arrivals at the Bhasan Char. We expect that by Tuesday evening they will reach,” Commodore Abdullah Al Mamun Chowdhury, director of the Bhasan Char Rohingya Camp Rehabilitation Project, told Anadolu Agency.

In line with the government’s plan, he said, arrangements have been made to relocate 100,000 Rohingya at Bhasan Char island.

“In the first batch we received 1,642 Rohingya and we have settled them there, and now we are waiting to receive another batch of less than 1,000.”

Citing safety and security at the crammed makeshift tents in the southeastern district of Cox’s Bazar, Bangladesh has developed new settlements for a temporary relocation of the refugees until a peaceful and dignified repatriation of the persecuted people to home country Myanmar’s Rakhine state.

According to Amnesty International, more than 750,000 Rohingya refugees, mostly women, and children fled Myanmar and crossed into Bangladesh after Myanmar forces launched a crackdown on the minority Muslim community in August 2017.

Bangladesh, a country which hosts above 1.2 million Rohingya, has developed the island project with a cost of more than $350 million from its internal sources.

According to Bangladesh government records, a total of 120 cluster villages have been made on the 40-square kilometer (15.44-square mile) island with houses built four feet above the ground with concrete blocks.

The entire housing site is protected by a 13-kilometer (8.07 miles) long flood embankment while there are also 120 cyclone shelters, which are planned to be used as schools, medical centers and community centers in normal period, records revealed.

No international group, including the UN, has supported the relocation move till now and repeatedly demanded for a complete feasibility study over the habitability of the “disaster-prone island.”

The international community is concerned over the safety of the Rohingya at the remote island as the silty island emerged more than two decades ago is reportedly prone to flooding and its inhabitants would face the risk of being washed out during a cyclone or stormy weather.

According to officials and locals, the island located 50 kilometers (31 miles) off Bangladesh’s southwestern coast remains disconnected from the mainland and any potential assistance during natural disasters.

Speaking to Anadolu Agency, Mostafa Mohammad Sazzad Hossain, Bangladesh-based Public Information Officer of UN High Commissioner for Refugees, said: “We are aware of reports that the Government of Bangladesh is preparing for another relocation of refugees to Bhasan Char.”

The UN has reached out to the government for further information on its relocation plans and is seeking “constructive dialogue” on the relocatio of Rohingya on the island, Hossain said.

Underlining Bangladesh’s commitment to operate the whole relocation process on a voluntary basis, he added: “The United Nations has emphasized that Rohingya refugees must be able to make a free and informed decision about relocating to Bhasan Char based upon relevant, accurate and updated information.”

“Those who may have changed their initial views about the relocation and no longer wish to move should be allowed to remain in the camps,” he opined.

Urging Bangladesh to undertake a thorough technical and protection assessment, he said: “The United Nations seeks constructive consultations and dialogue with the Government aimed at better understanding the island settlement project.

Bangladesh Foreign Minister AK Abdul Momen told Anadolu Agency that the island is “completely safe” as a living place for Rohingya and the host community.

“The Rohingya who have already shifted there are very happy. Some of them are aged and still they have children or grandchildren at camps in Cox’s Bazar. They want to take their close ones to them,” Momen said.

He accused some “evil quarters” of spreading negative propaganda about the island.

“Evil quarters always spread panic and say to Rohingya that Bangladesh is trying to kill them at the island; The island remains under water most of the time; it peeps up sometimes and goes under water sometimes, etc.”

Momen went on to say that the island is not at all a distant island in the deep sea. “There are another 54 islands including Hatia, Sandwip near the Bhasan Char. Thousands of people have been living in those islands for decades,” he added.

He said Bangladesh has also arranged shipping lines with the island. “Every Saturday and Tuesday, steamers will go to Bhasan Char from the mainland and we hope that people’s movement to the island will be more frequent.”

Regarding the opposition of the rights defenders, he said that workers of the aid agencies and other international NGOs have been leading a luxurious lifestyle in Cox’s Bazar and they do not want to shift to the island in fear of losing their luxuries.

“International communities think that it’s a floating and distant island amid a deep sea and anytime it may go under water. That’s why they are scared. But it’s thoroughly wrong,” he said.

He added that Bangladesh is optimistic that within a short time international communities will understand the fact and spread their helping hands at the island for the welfare of Rohingya there.