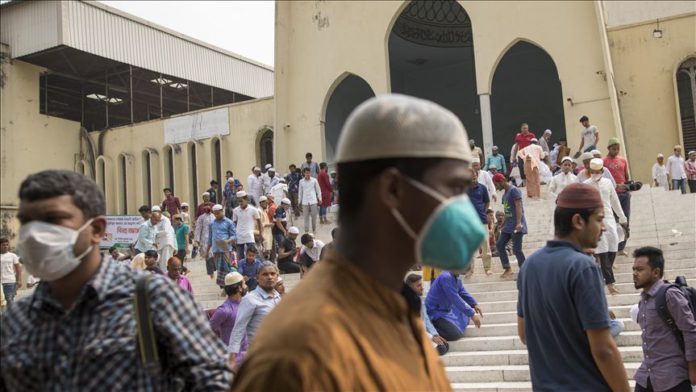 Bangladesh on Tuesday recorded the highest single-day fatality and case numbers of COVID-19, according to the official figures.

The South Asian country of 165 million recorded 45 deaths from the virus in the last 24 hours, the daily record since the first reported death on March 18, according to the Directorate General of Health Services.

The total live casualties stand at 975 with the new ones while the country on Tuesday also detected the highest one-day infections with 3,171 new cases, surging the total figure to 71,675.

So far 15,337 COVID-19 patients in Bangladesh, however, recovered from the disease.

Meanwhile, Fakhrul Kabir — the director of Department of Women’s Affairs — and Dr. Rahat Anwar — a noted physician and founder of a private hospital — died of the virus in the capital Dhaka in the early hours on Tuesday, according to officials and local media reports.

A top police officer in Chattogram, the country’s main port city, has also contracted the disease, said a police source.

“We have been confirmed about the COVID-19 positive report of our [Chattogram] Metropolitan Police Commissioner Md Mahabubor Rahman,” Mehedi Hasan, the city’s south deputy commissioner of police, told Anadolu Agency.

Meanwhile, Bangladesh is going to impose lockdown once again based on three zones — red, yellow and green — due to the rising trend of infections for the last couple of days.

Since Tuesday midnight, some areas in Dhaka — considered red zones — will be put under complete lockdown.

Earlier, the country observed a 66-day nationwide lockdown since March 26 that was later eased before the holy Eid-al-Fitr, citing economic interests and people’s sufferings.

Libya calls on Turkish companies to re-invest in country