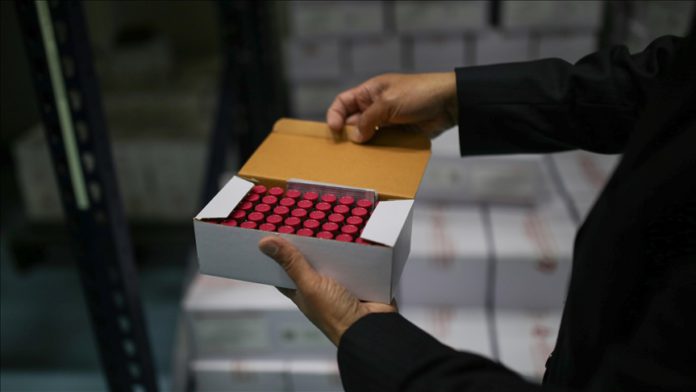 Bangladesh received its first shipment of 2 million Chinese Sinopharm coronavirus vaccines under commercial procurement, according to its Foreign Ministry on Saturday.

A total of 1.1 million vaccines have arrived while the remainder will arrive later Saturday as vaccines carrying flights left Beijing, according to the Chinese Embassy in Dhaka.

China provided the vaccines as a gift to Dhaka and Bangladesh has started inoculating under a mass vaccination campaign that began in February.

Bangladesh signed a non-disclosure agreement to procure about 10.5 million vaccines from China.

Meanwhile, the first of the two consignments of 2.5 million doses of the Moderna vaccine was also received from the US under the COVAX framework, according to the Foreign Ministry.

Foreign Minister Dr. A K Abdul Momen and Health Minister Zahid Maleque received the first shipments from 2 million Chinese Sinopharm and 1.2 million doses of Moderna’s vaccine in the presence of US Ambassador to Bangladesh Earl Miller and senior officials.

The second consignment of the Moderna vaccine is scheduled to arrive late Saturday. The shipment is part of the US’ recent allocation of 25 million doses to Asian countries.

Maleque told reporters that the Oxford-AstraZeneca vaccine would come again in August from the Serum Institute of India (SII).

The South Asian country has an agreement with SII for 30 million doses — 5 million jabs every month from January to June. It has paid for 15 million but received only 7 million. New Delhi has also gifted 3 million doses to Dhaka.

And efforts are being made to bring 100 million doses from various sources by December to ensure the government’s target to inoculate 80% of the population, he added.

Bangladesh, with a population of 165 million, has inoculated just 3% of its population with 5.8 million residents receiving a first dose and 4.2 million a second of the Oxford-AstraZeneca vaccine.

The country, currently enforcing a weeklong nationwide lockdown from July 1 because of souring infections and deaths, has recorded nearly 930,042 cases, including a death toll of 14,778, according to official data as of Friday.

Judge rules that Trump, 2 of his children must testify under...