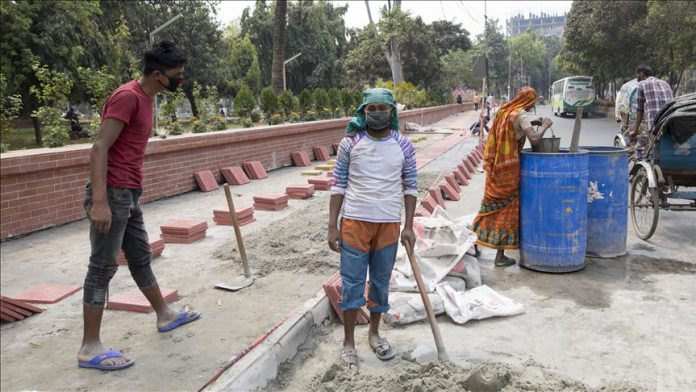 Amid a nationwide lockdown to stem the spread of coronavirus or COVID-19, hundreds of thousands of low-income workers in Bangladesh are protesting in the capital Dhaka and elsewhere demanding food and unpaid wages.

Police have been patrolling the streets in most of the country to enforce social distancing and stay-at-home orders as the virus is taking its toll.

While banks along with other government and private sector businesses say they will take responsibility if anyone gets sick, the situation is the opposite for others.

Low-income groups including day laborers and garment workers are badly-affected groups in as they instantaneously have become jobless due to the nationwide lockdown, which began on March 26 and has been extended until May 5.

Shohelur Rahman, 40, a rickshaw puller in Dhaka said he is mostly spending his days in his house located in a slum area with other daily wage laborers.

“I have not earned anything because of the lockdown,” he said noting that his daily income was around 500 Bangladeshi takas (around $6) before the lockdown.

“I do not have any savings left to shoulder my family members,” said the father of three.

He said that most workers, including those working garment factories in his slum, are facing the same fate. “Some of them are striving as they became jobless after the lockdown, “he added.

He rued that workers like him are not getting any food assistance from the government.

The government has announced over $11 billion stimulus package for different sectors including the agriculture and garments sector to provide soft bank loans and to assist people who have become victims of the current situation.

Shah Kamal, senior secretary at the Disaster Management and Relief Ministry said the government has started providing emergency food to millions of people across the country.

“A total of 10.25 million people will come under food assistance and cash cover in different categories,” Kamal told Anadolu Agency.

“Around 5 million poor people will get free food assistance while rest will get relief under the government’s special open market sale (OMS). And, the number of relief items will be increased in Ramadan,” he added.

The local representatives are distributing those assistances, he added. He said in the direction of Prime Minister Sheikh Hasina, strict action will be taken against those found guilty in misappropriation of relief.

On April 20, Hasina said her government will procure 2.1 million metric tons of food grains to ensure food security and fair prices to farmers.

A recent study has also highlighted the rise in unemployment and the halt in economic activities.

The study said incomes of the ultra-poor, moderately poor and vulnerable non-poor in Bangladesh have fallen by 70% due to the coronavirus outbreak.

Authored jointly by the Power and Participation Research Centre and BRAC Institute of Governance and Development, the study also said that economic activity has come down by 71% in urban areas and 55% in rural areas.

Meanwhile, thousands of garment factory workers have been taking to the streets in the capital and other cities demanding their unpaid monthly wages despite government warnings to business owners to pay their workers on time.

In a joint statement on April 15, three trade unions alleged that some 10,000 garment workers, including in the capital Dhaka, had lost their jobs or had been terminated over the last couple of days.

The Bangladesh Garment Manufacturers and Exporters Association, however, said international buyers have canceled more than $3 billion worth of orders since the outbreak of a pandemic.

The association also claimed that the factories listed with it have paid dues to their workers.

The Finance Ministry has warned garment factories owners that they will lose government incentives in case they are unable to clear arrears to their workers and clear other government requirements in the time of coronavirus outbreak.

On Monday, some of the factories resumed their operations. The authorities said other factories will also be opened gradually.

Urgent need for food and relief

Zafrullah Chowdhury, a frontline public health activist, said that food and relief are urgently required for at least 10 million people who have become jobless across the country and left with no resources due to the nationwide lockdown.

“It is difficult to ask low-income groups, people and day laborers, to stay at home unless the government does not have the proper arrangement, including food assistance and financial supports, for those who survive on their daily earnings and do not have savings,” Chowdhury told Anadolu Agency.

Bangladesh on Monday reported a total of 5913 confirmed cases of coronavirus, with 152 deaths.