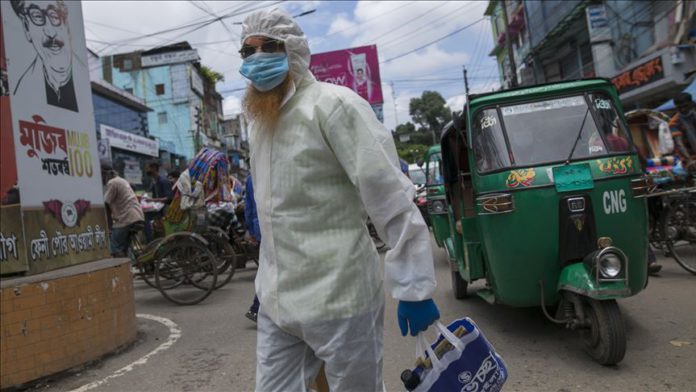 A small-time public official has become the only hope for many victims of coronavirus in Bangladesh where authorities are hard-pressed amid rising cases.

Maqsoodul Alam Khondaker Khorshed has so far buried 87 bodies after bereaved families could not find any one to arrange a funeral.

The fear surrounding COVID-19, the deadly disease caused by the novel virus, has created an atmosphere where even family members are refusing to take bodies from hospitals, he said.

His Team Khorshed-13 comprising 60 members is helping arrange funerals on a voluntary basis.

In the process, Khorshed and his wife also contracted the virus, but have since recovered.

He said in its aftermath he was showered with love.

“I felt like this is why I was born in this world.”

He said he first got a phone call from a girl on April 8.

“She said: ‘My father died due to breathing complications, fever and cough. My mother and I have his body and none of our relatives are helping with the funeral’.”

We have since been helping with burials, distributing food and collecting blood plasma donations, he said.

Since then his team has buried one deaths from the virus per day.

Nioti Rani Banik, a middle-aged woman, shared with Anadolu Agency how her 75-year-old father died with COVID-19 symptoms at home.

“On April 19, he returned from his duty and suddenly fell sick and died after a few hours with breathing problems, chest pain and stroke in the middle of night. Being a village doctor, my father has a good number of well-wishers. But I found no one who will step out to organize his last rites, cremation.

“God sent councilor Khorshed as an angel to us. He showed that humanity is above all religion. Despite being a Muslim, he conducted all our Hindu rituals for my father’s last rites. I must not forget his role.”

Dr. A S M Alamgir, chief virologist at the Institute of Epidemiology Disease Control and Research (IEDCR), the disease control authority in Bangladesh, described his volunteer activities as “noble”.

“This man, Khorshed, stepped up when there were protests from villagers and local people against funerals.”

Vaccines are the way out of pandemic, says German chancellor