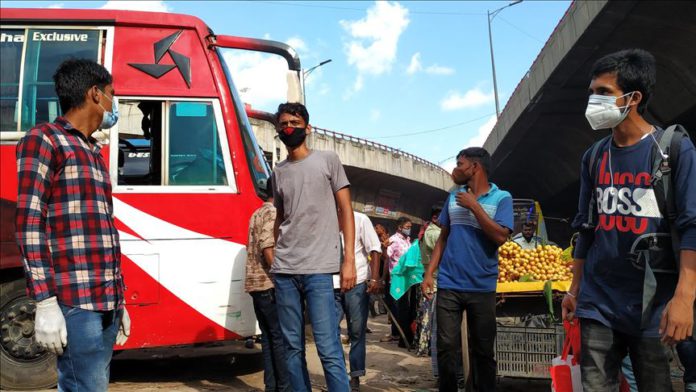 Experts in Bangladesh suggested that alternative testing methods be introduced alongside the reverse transcription polymerase chain reaction (RT-PCR) analysis amid low COVID-19 testing and sample collection, which has raised fears over the further spread of the deadly disease in the country.

The time has come for utilizing antibody and antigen testing to detect the coronavirus as a supporting method as such testing involves less effort and is hassle free, they observed.

Bangladesh is now the 16th worst affected country in the world in terms of total infections. Meanwhile, there is an over 20% infection rate in daily sample testing (only PCR labs conducting testing) while there has been a sharp fall in virus sample testing.

Bangladesh ranks the lowest among Asian countries in sample testing as cut the testing about 25% in July as comparison to June.

The country, with a population of around 165 million, tested 1.4 million samples so far with more than 290,000 positive cases of coronavirus and over 3,860 deaths.

The story behind the low number of sample tests is also linked to the asymptomatic positive to COVID-19 without having no symptom in the country, said Dr. Bijon Kumar Sil, the leader of a Bangladeshi research team at Gonoshasthaya Kendra Hospital, the first health center or hospital in independent Bangladesh.

“Symptoms have taken a turn from the respiratory organs or routes to gastro routes, so people could not understand whether there is any COVID-19 infection,” he told Anadolu Agency.

He suggested that –at least 20,000 samples be taken daily.

“We should begin the antibody testing to know the real scenario of infection in the country while the virus has already spread outside the capital, Dhaka,” said Sil, whose team has also developed a kit that can detect antibodies that have developed in the body of a person who has recovered from COVID-19.

“A single testing method could not cover such a big population; we need to operate both PCR labs and antibody sample testing. Like where there is no facility of PCR lab testing, we could go for antibody testing. Antibodies develop in the human body in 15 to 20 days, so it would be hassle free to diagnose what we used for the SARS outbreak in 2003,” Sil added.

Dr. Mohiuddin Ahmed Khan, a member of the country’s National Technical Advisory Committee on COVID-19, said “50,000 would be better, but considering the country’s capacity, we should test at least 20-25,000 on a daily basis.”

“I think about 40% of the total population in the country has already been infected with COVID-19,” added Khan, who is also professor of the Hematology Department at Dhaka Medical College.

The experts said that many people having the coronavirus symptoms avoiding to visit the hospitals for testing.

A study released last week also disclosed that about 9% making around 1.8 million people of the total population in Dhaka is asymptomatic but they couldn’t show the symptoms.

The study, conducted by the Institute of Epidemiology, Disease Control and Research in collaboration with the International Centre for Diarrhoeal Disease Research, Bangladesh, also said about 6% of slum dwellers in the city are infected with the virus.

“We always suggested widening the testing. There is no prevailing situation in the country to decline the testing number, rather we suggested the government introduce alternative testing for the virus, including antigen and antibody testing,” he added.

Government officials, however, claim the Muslim Eid-al Adha holiday and floods across the country were also factors.

The floods claimed at least 222 lives while more than 50,000 people across the country were infected with waterborne diseases, according to the DGHS .

Meanwhile, over two million people are in need of food assistance, water, sanitation, hygiene and emergency shelter and some 850,000 remain displaced, a figure expected to increase as the rains continue, said a statement of the Delegation of the European Union to Bangladesh after providing a total grant of 3.45 million euros (US$4.09 million) for three South Asian countries including Bangladesh.

However, the Flood Forecasting Warning Centre said the flood situation is improving.

The heath authorities do not test the positive patients after recovery to declare them as COVID-19 negative.

“We have a sufficient number of test kits, skilled manpower and labs. The government is recruiting necessary health technicians as demanded,” said Prof. Sultana, adding “we regularly run awareness campaigns in favor of sample testing so that no one is left without testing.”

The authorities are also working to extend the testing facilities across the country as currently there are 86 sample testing PCR labs, among them 38 are operated by private organizations, said Sultana.