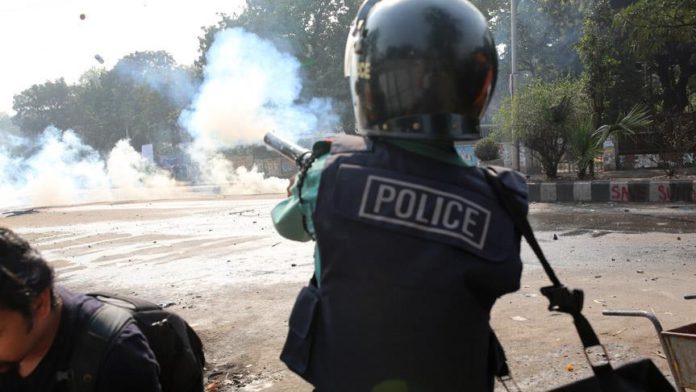 Hundreds rallied in the capital of Bangladesh on Friday to demand justice for people killed in violence during demonstrations against Indian Prime Minister Narendra Modi’s visit last week.

The rally was organized by non-political Muslim group Hefazat-e-Islam at the Baitul Mukarram National Mosque in Dhaka after Friday prayers.

“Twenty of our supporters and activists were killed by law enforcers during our peaceful rallies across the country against the visit of that killer Modi,” Mamunul Haque, joint secretary general of the group, said in an address.

“We demand an impartial investigation into their murders and fair trial of those responsible for their deaths.”

There were massive demonstrations in Bangladesh in the run-up to and during Modi’s visit on March 26 and 27, with over a dozen people killed and more than 100 injured in clashes between police and protesters.

Modi was in Bangladesh for celebrations marking 50 years of the country’s independence and the birth centenary of its founder, Sheikh Mujibur Rahman.

His visit drew widespread condemnation from critics who accuse him of stoking religious polarization in India and encouraging persecution of minorities, particularly Muslims.

“Along with the police, activists of the [ruling] Awami League and its student wing, the Chhatra League, also attacked the people who were protesting against Modi,” Haque alleged at Friday’s rally.

Other speakers criticized the government’s “undemocratic” actions and “suppression of free speech.”

They demanded the immediate withdrawal of all cases filed by police against leaders and activists of Hefazat-e-Islam.