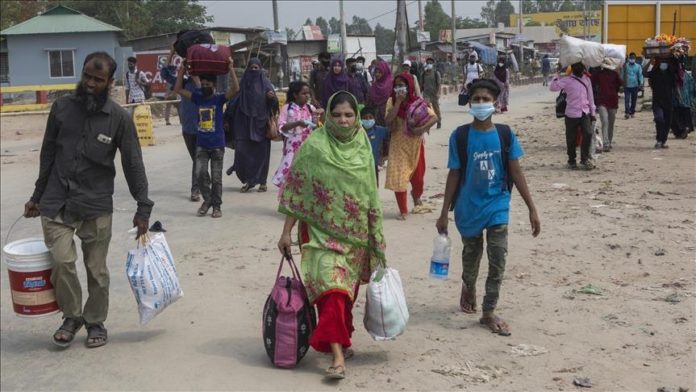 Bangladesh has imposed a “strict” weeklong lockdown that will take effect Thursday as coronavirus infections and deaths continue to surge with the domination of the Delta variant.

The cabinet division of the government issued a notification Wednesday that asked people not to come out of their homes unless there is an emergency.

Operation of public transportation and engine-run vehicles, including road, rail, water, and domestic flights will be suspended.

The South Asian country registered a record number of infections in the past 24 hours with 8,822 cases since the pandemic hit the country in March last year, taking the caseload to 913,258, according to the Health Ministry.

A total of 115 people died, the second-highest number of daily casualties to date, taking the death toll to 14,503 with a worrying rising daily positivity rate of 25.13%.

The notification asked all government, semi-government and non-government organizations to close. But factories can operate with their own arrangement for transportation.

Shopping malls, tourist spots, resorts, community centers, and all public, political and religious gatherings will be suspended while banks will remain closed until July 4.

International flights, however, will remain in operation.

The army will also be on the ground with police and Border Guard Bangladesh to enforce strict restrictions.

Dhaka Metropolitan Police Commissioner Md. Shafiqul Islam said at a news conference that during the lockdown police would arrest and lodge cases against those found coming out of their homes without an urgent need.

Mobile courts will work on the ground and those found guilty will serve a six-month jail sentence, or be fined or both, he added.

Thousands of Bangladeshis left Dhaka through different exit points including waterways, fearing the lockdown, and are being packed in hired micro-buses or on foot.

As of Tuesday, Bangladesh has inoculated 5.8 million residents with the first dose and 4.2 million with the second of the Oxford-AstraZeneca vaccine.

The mass inoculation was suspended on April 25 while the second dose was in limited supply.

Around 1.5 million people have yet to be given a second dose as a shipment from India was halted as cases there skyrocketed.