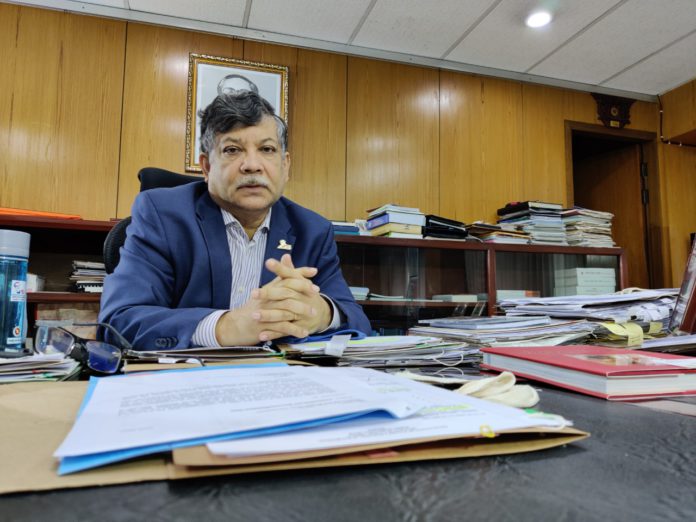 In an exclusive interview with Anadolu Agency, Bangladesh’s Foreign Secretary Masud bin Momen shared his views on a range of issues, including migration to Europe, Dhaka’s interest in procuring military equipment from Ankara, and bilateral trade.

The top diplomat thanked Turkey for the quickest response to the Rohingya refugee crisis with Turkish First Lady Emine Erdogan visiting the camps in Cox’s Bazaar in 2017.

He said Turkey was a good choice for Bangladesh in procuring military hardware as Ankara being a NATO member can assist Dhaka in the defense sector.

Anadolu Agency: Honorable Foreign Secretary of Bangladesh Masud bin Momen, why are so many Bangladeshi choosing to migrate to Europe using illegal routes at a risk to their lives?

Masud bin Momen: Let me thank Anadolu Agency for expressing interest on the subject. Definitely Europe is an attractive destination for immigration, not only Bangladeshi migrants but also for other countries in South Asia.

Obviously, people who are risking their lives to migrate to Europe put their families in considerable mental agony and financial crisis. But most importantly at the end of the day, it is also not good for the image of Bangladesh abroad.

Under the leadership of Prime Minister Sheikh Hasina, Bangladesh has done well to elevate the country’s economic status and by graduating out of LDC (Least Developed Countries) group. The country is also performing well in economic and social developments. Recent indicators have shown that Bangladesh is actually doing better than many other countries in the region.

The whole process of such migration is based on false promises and fraud networks. As one of the proponents of the Global Compact of Migration, Bangladesh as a state has been promoting and supporting regular, safe and orderly migration which is a win-win for both sending and receiving countries.

AA: Available reports and data show that only in the last one month more than 500 Bangladeshi nationals have been rescued by the Libyan and Tunisian authorities during their attempts to illegally migrate to Europe, mostly to Italy. Why aren’t you able to contain this trend?

MM: That’s a very difficult question. You have to read the minds of these people. You need a thorough analysis, a psycho-social and economic analysis of those persons when they return to Bangladesh.

We have the Ministry of Expatriate Welfare and Overseas Employment, the BMET (Bureau of Manpower, Employment and Training), many skill development schools and apparatuses where people are being trained for foreign employment. The BMET issues smart cards in favor of the trained personnel for their future employment in a receiving country through a legal channel.

Even during this pandemic, when we had to stop international flights, we negotiated with concerned stakeholders to keep some flights open (five to six countries) in the Middle East.

As a result, during this period of lockdown, more than 90,000 people went abroad to return to their work as well as some fresh recruits.

Currently, people are migrating to Saudi Arabia and two or three other countries. So it’s not correct that aspiring migrants do not have the scope of taking regular courses. Maybe it is delayed and there are difficulties and the receiving governments take time. But our government is fully committed to promoting migration through legal channels.

Most of the Europe bound migrants are lured by middlemen or traffickers to take illegal routes, knowing fully well that they might be detained in foreign land and might face life risks, yet some chose to take that risk.

Government has a zero tolerance for illegal migration. But to rectify it, we need to address the root causes. It is not the duty of only law enforcement agencies. The families, the villagers, the peers, friends, school teachers and all elders in the society are somewhat responsible to raise awareness against these illegal practices.

We have reports that many people have paid 500,000 Bangladeshi taka [$6,000] to the middlemen or brokers to illegally migrate to Europe for a single person. Then once they are caught by different groups and in some cases militia, or other racketeers more money is extorted from their families and sometimes the figure stands at 1 million Bangladeshi taka [$12,000] or more.

AA: Do they also suffer torture at the hands of these smugglers?

MM: Yes, it is done as a tool for intimidation and extortion of money.

When most of the countrymen — farmers, industrial workers, garment workers and others are working very hard to promote the country, some irresponsible people are taking these routes damaging the image of Bangladesh.

The honorable prime minister keeps inspiring our people to be self-employed rather than looking for a job. Self-employed people are proud people who create jobs for others, she often says. We have so many institutions and the government is also mobilizing funds to create entrepreneurial opportunities. So some of those, who are educated yet desperate to go to Europe, can instead create employment for 10 to 15 people.

We know many good stories like some people bringing mangoes from the northern areas of the country and selling those to the consumers directly and earning decent income.

AA: But still some people are willing to take risky sea routes to migrate to Europe. Do you think some people are not satisfied with the socio-economic condition of the country?

MM: I don’t think there is any dire situation prevailing in the country which is actually forcing these people to go abroad. For example, if you want to get some quick returns, then you invest in share markets without properly understanding the risk factors involved there, then you blame the whole share market instead of your ignorance.

Similarly, if you have gambling problem, you go to gambling places, and lose your money fully understanding the risks.

Some people have success in migrating to the Middle East or to Europe. Listening to their stories others also believe if they go, they can also gain similar benefits. However, they don’t realize that things have changed over the years in Europe and other countries, who are now giving more emphasis to employ their own nationals.

Even in the Middle East where there is a serious shortage of workers in different fields, they are now arranging a lot of programs on how to recruit more of their own nationals and reduce the number of foreigners.

Therefore, in the future we have a situation that unless you are skilled in the right way your opportunities will be restricted. We are discouraging illegal migration and at the same time we must find out the root causes for such migration.

Of course those who are already in distress abroad, we will bring them back. Our embassies and our officials are ready to serve our distressed nationals abroad. However, once they are returned, they have to be thoroughly examined and interviewed so that we can learn why they did so and who helped them or who motivated them, or who lured them.

Otherwise, they may take this kind of chance once again as they have already lost huge amounts of money. Secondly, they themselves may become recruiters to cover the losses.

AA: There are some reports and allegations that some local people and agents, in collaboration with their foreign partners have developed a network and are luring people to take such illegal paths. Will you take action against them?

MM: Sure, based on solid information and evidence, we can also approach relevant countries if their citizens are found involved. We should break the networks jointly with other countries or all relevant parties.

AA: Turkey is interested in boosting bilateral trade with Bangladesh from $1 billion to $2 billion immediately. Are you interested?

MM: The existing relationship between Turkey and Bangladesh is excellent. It is on a very positive trajectory. It’s not just Turkey’s political or material support for the Rohingya. Turkish first lady as the first foreign dignitary visited the Rohingyas after August 2017 military crackdown in Myanmar’s Rakhine State. It was a big gesture on their part to help mobilize international support for the persecuted people.

But more important is the high level visits in recent times. Turkish Foreign Minister [Mevlut Cavusoglu] visited Bangladesh amid the pandemic and we also visited Turkey to inaugurate our newly built chancellor’s complex in Ankara.

There is increasing interest in Turkey to take part in big development projects in Bangladesh. Turkey is very good at construction. They are interested in investing in the healthcare sector of Bangladesh. They are planning to build a big hospital in Bangladesh.

These are all commercial investments but I am sure that two governments are interested in facilitating more of such interactions.

AA: Bangladesh is procuring military hardware from Turkey. Why does Dhaka prefer Ankara?

MM: We are procuring military hardware from Turkey, as they have very good quality of hardware.

Turkey is a member of NATO and has standard military equipment at affordable prices and our military, navy and air force will benefit by Turkish military hardware.

For our peacekeeping operation and other reasons, we procured some hardware in the recent past and in future this procurement will continue.

AA: Very recently Bangladesh Navy and Air Force chiefs visited Turkey and they have discussed with their Turkish counterparts cooperation in defense sectors. Do you think Turkey has the potential to work in the military sector of Bangladesh?

MM: Sure, Bangladesh is rising very fast and economically our capability to invest in the defense sector has also been strengthened and so Bangladesh has increased its defense budget “proportionally” and “accordingly”.

We are diversifying our procurement sources. Earlier, we procured military hardware from some limited sources. Now we are expanding that horizon. Many European countries have also expressed interest in selling military equipment to Bangladesh.

Bangladesh will certainly benefit from competitive offers with a possibility of technology transfer and more opportunities through backward linkages. We will judge which offer serves our interests better and in this regard I think Turkey has a very good chance.