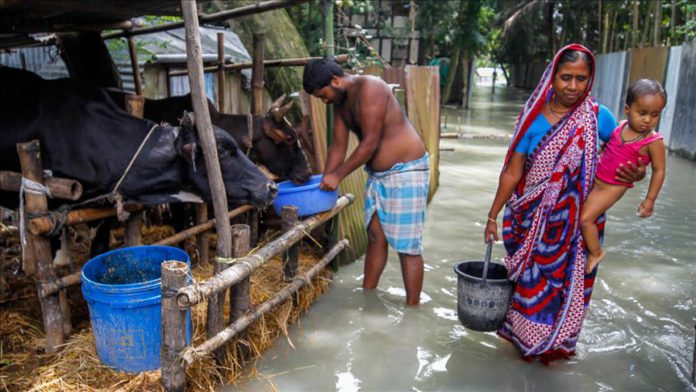 The death toll in Bangladesh’s floods increased to 119 with eight more fatalities in the last 24 hours, officials said on Sunday.

As many as 10,684 others have also been injured in the disaster that has affected 21 of the country’s 64 districts since June, latest figures by the government said.

Of the total deaths, 96 drowned while 13 died of snakebites, it said, adding that around 5,000 people in flood-hit areas are suffering from diarrhea and other water-borne diseases.

Environmental experts have warned of long-term adverse impact due to the flooding in Bangladesh, a delta-nation crisscrossed by hundreds of rivers.

Heavy rains in the neighboring Indian state of Assam, he said, have resulted in huge inflows into downstream Bangladesh.

The monsoon, which usually falls from June to September, causes widespread death and destruction across the region every year. It destroys crops and displaces people in villages.

Chowdhury said the issue has become more severe due to the ongoing coronavirus pandemic.

As many as 2,928 people have died of the virus in the South Asian country to date.

Due to virus restrictions, he said, many people left urban centers for income opportunities but “now they are losing life-saving income sources in rural areas as well.” Bangladesh imposed a lockdown from March 26 to May 31.

Meanwhile, Atiq Rehman, an expert on climate change, said rivers have become shallow due to dams being built by India on common rivers. Bangladesh and India share at least 53 rivers.

Terming the current situation as “extreme,” he urged leaders of both the countries to discuss this recurring problem.

According to a recent UN report, millions of people in India, Bangladesh and Nepal have been affected by the widespread flooding. Of them, over four million children need urgent life-saving support.